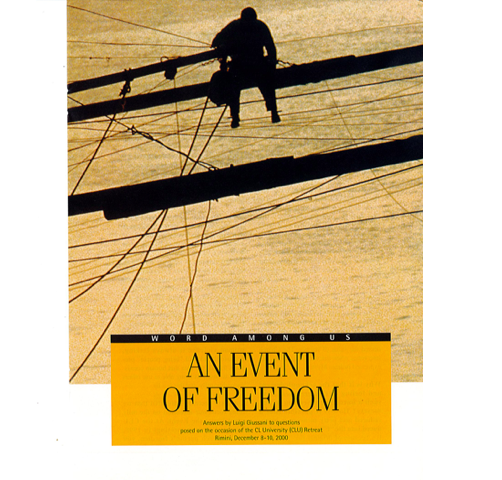 The perception is growing in many–even within situations of contradiction and acute difficulty–of an unfathomable depth, of a mysterious and unassailable root of the person, and the ever-more intense need to discover its nature. Why does man “feel so high”? What makes him so great, greater than other created things? What is in him, and only in him, which cries out through everything he lives?
Psalm 8 tells us what the human “I” is, what the things he can feel are. Psalm 8 contains the answer. “What is man that thou art mindful of him, and the son of man that thou dost care for him? Yet thou hast made him little less than God.” This greatness does not arise from a form of exuberance, from man’s own strength. It is the opposite. Man is, as it were, nothing. And yet, “Thou hast made him little less than Thee”–the self-awareness of the cosmos. The Psalm lists man’s dominion over nature (“Thou hast given him dominion over the works of thy hands; thou hast put all things under his feet”), man’s greatness, which can be attributed to the value of his dominion over nature through science. Nature comes from the hands of God into man’s hands. This explains why the Church has never denied the value of science. The Church intervenes when the way these things are expressed isolates Mystery.

Why is it that the acknowledgment and feeling of this greatness have such a hard time emerging in our society? How is it possible that a reduced and petty measure is introduced into the “I”?
It’s because of original sin. This is its most visible consequence. Original sin is not making God the “all in all.” And all man’s sins, which derive from this one, are the claim to replace God. Science, man’s unending possibilities for discovery, becomes the pretext for eliminating God. This blasphemous presumption finds in power its capacity for penetrating every man by osmosis. This is why the use of scientific power or knowledge tends to identify with political power. Look at the pages of the newspapers! It is really evident now! Power, especially economic power, is the abolition of all gods except one, in its threefold version: usury, lust, and power, to use T. S. Eliot’s words.

What can cause man’s awareness to emerge once again? How is his capacity for destiny, his freedom, reborn?
No advance of science, of human power will ever be able to say, “We have reached the point of knowing everything, of having power over everything that interests man.” This is why a man who is not open to the relationship with God is ultimately not interesting. The more one claims the contrary, the more one tries to set up a life without God, the more are the balance of power and peace destroyed. All wars are produced by the hunger for power. Thus also between man and woman violence is always lurking, because the idea of “using people” prevails, that is; the idea that human coexistence is based on being able to use others unconditionally, and this is a lie.

You have recently reiterated that we must focus our attention on the only great issue: the Event. At the CLU Equipe [summer meeting] in 1998, evoking each person’s freedom, you offered this invitation: “Bring this dynamic, which we have carried forward for years, to fulfillment yourselves. It is the main reason for our friendship, this fulfillment of man’s heart, of the heart’s demands.” What is the experience of freedom to which we are called by the great issue of the Event?
Simplicity of heart, being childlike, which calls us to faithfulness to what happens precisely as an Event. It is being struck by a presence. What goes against this is preconception. Living in preconception and doubt, making them grow stronger as you age, is a crime. It is mainly young people who doubt, but in this way old age will fix its gaze on nothingness. This is the “nothing” of the “braggarts” of today, even of many intellectuals who, maybe without saying so explicitly, live like this.

Recalling to one of us the episode of the rich young man, you said that the only morality of man is to accept the relationship of the Event of the present Mystery, and to follow it: “Jesus looking at him, loved him, and said, ‘… go and sell your possessions and give the money to the poor… then come, follow me.’” How does this gaze of Christ, through which this same “follow me” reverberates, happen for each of us?
In the evidence given by the bolt of lightning of the Event, that is to say, by an encounter, by a presence. One can also not ascribe much importance to this “bolt,” but when he has been struck in a certain way, he can no longer isolate himself from Him. Therefore this “follow me” lies in the richness of an actual humanity.

Your last answer in your Panorama interview said: “In our Movement the educative effort pivots on the way in which we can reach certitude about Christ today, so as to develop the great Christian certainty in our own awareness; so that the whole of our life, with all its positive aspirations, with a clearer and clearer awareness of our weakness, incapacity, or evil, may be rooted in the Mystery of Christ.” What is the road that leads to certainty about Christ?
This is the entire history of a company like ours, through which echoes the call the heart must make to us in accordance with the surplus of experience that we felt at the beginning of the Event. Christianity, being a Reality that is present, has as its instrument of knowledge the evidence of an experience, as can be noted in the dynamic of any encounter whose most important, decisive, and real factors come out. In concrete terms, the way to certainty about Christ comes from our companionship, as our companionship is the manner by which Christ touches and moves us, and in which we live our total hope, as fore-seen and understood. Not adhering to our companionship is the result of a preconception. Note that true realism must imply the human capacity to realize this. True realism demands simplicity before what is evident. A Christian’s life cannot abandon the certain road, his certainty in Christ, because once someone has been touched by the Event, he can never forget that from this Name a surplus of integral correspondence sprang forth, which he could not possibly hope to find in any other phenomenon of encounter. This is how Christian hope is born: the certainty of a future based on One Who is Present.