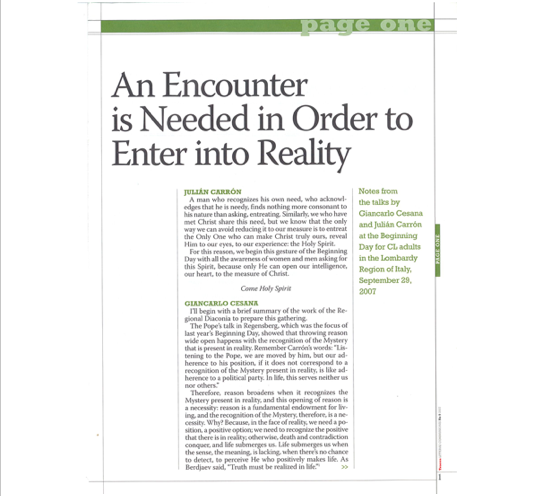 JULIÁN CARRÓN
A man who recognizes his own need, who acknowledges that he is needy, finds nothing more consonant to his nature than asking, entreating. Similarly, we who have met Christ share this need, but we know that the only way we can avoid reducing it to our measure is to entreat the Only One who can make Christ truly ours, reveal Him to our eyes, to our experience: the Holy Spirit.
For this reason, we begin this gesture of the Beginning Day with all the awareness of women and men asking for this Spirit, because only He can open our intelligence, our heart, to the measure of Christ.

GIANCARLO CESANA
I’ll begin with a brief summary of the work of the Regional Diaconia to prepare this gathering.
The Pope’s talk in Regensberg, which was the focus of last year’s Beginning Day, showed that throwing reason wide open happens with the recognition of the Mystery that is present in reality. Remember Carrón’s words: “Listening to the Pope, we are moved by him, but our adherence to his position, if it does not correspond to a recognition of the Mystery present in reality, is like adherence to a political party. In life, this serves neither us nor others.”
Therefore, reason broadens when it recognizes the Mystery present in reality, and this opening of reason is a necessity: reason is a fundamental endowment for living, and the recognition of the Mystery, therefore, is a necessity. Why? Because, in the face of reality, we need a position, a positive option; we need to recognize the positive that there is in reality; otherwise, death and contradiction conquer, and life submerges us. Life submerges us when the sense, the meaning, is lacking, when there’s no chance to detect, to perceive He who positively makes life. As Berdjaev said, “Truth must be realized in life.”1
We all recognize friendship, our friendship, as a reality that more fully carries the Mystery, the Mystery that makes all things, Christ (Christ is the name of the Mystery; He Himself is Mystery). In fact, as was said in the Regional Diaconia, if our friendship does not call our attention to the Mystery, if it doesn’t remind us of this positive factor upon which all things depend (the Mystery is the evidence of a Presence that we do not possess, but is evident, is not hidden), if there is not a call to this, then friendship, our companionship, the Christian gesture itself becomes a complication, sometimes even an unbearable one.
Therefore, the tension of life is to live the ordinary in an extraordinary way, to live banality in an exceptional way. As John Paul II said in 1980, speaking of St. Benedict: “It was necessary that the heroic become daily, and the daily become heroic.”2 These are also the first words at the foundation of the birth of the Fraternity of Communion and Liberation–the words refer to the times of Saint Benedict, but also to our times, which are just as dark.
Last Saturday, I went to see “Cheese,” a trade fair in Bra (excuse the banality of the episode), and I met Carlin Petrini, the founder of Slow Food. As we were eating, we got to talking about Genetically Modified Organisms, and to demonstrate his thesis (he, who calls himself an agnostic, a left-winger, is against GMOs, and I’m for them), he spoke enthusiastically about the love for the land cultivated naturally by the peasant farmers of Latin America or Africa. I observed, “Yes, but what you’re talking about is an exception. How can this change the world?” He stopped me and said, “But, you and I both know that we’re living exceptions.”
What’s needed is an exception; what’s needed is heroism of life, not because this is against banality, but because it illuminates it. It’s like when a guy loves a girl and she says, “Yes.” The world is the same, but it’s different. The light is different, the flavors are different, relationships are different, what he does is different, his toil is different. Thus, the difference that makes it possible to live the ordinary lies in affection, which means being attached, in the passive sense and in the active, attached by and to what’s true, living reality intensely. The presence of the Mystery is awesome; our life is mystery; reality is mystery; the world is mystery. It’s our freedom that comes and goes. At times, we have the opposite impression, but it’s not this way: in order to see the presence of the Mystery, you have to ask–always!
As Fr. Giussani wrote in From Utopia to Presence, “The judgment of value is the first question of life.”3
“The word ‘affection’ is the greatest and most all-encompassing of all our expressivity.”4
“When a young man looks at his girlfriend and thinks, ‘Not even a hair of your head will be lost,’ this is like a volcano of tenderness, of sweetness, and of security. It’s an experience of unbounded gratitude! But if someone is a boor, incapable of loving, or if he is an abstract fellow who speaks of ‘Jesus Christ, the meaning of life’ without relating it to his love for his girlfriend….”5
“Seek what is above, where Christ is seated at the right hand of God,”6 said Saint Paul, because this is what fills life with the intensity that makes it, to whit, heroic.
In the extraordinary, in the exceptional events–be they positive or negative–it seems easier to seek and ask for Christ. Instead, in ordinary things it seems arduous and difficult; that you ask for Christ is not a foregone conclusion. In fact, it’s almost more essential, because life is spent in the ordinary hours of our days. So then, we ask: “In this search, what is our personal responsibility? What help can our friendship give us?”

“My name is Vicky. I am 42 and I come from the eastern region of Uganda. I want to thank you and God for the precious life that He has given me. In 1992, when I found out I was pregnant with Brian, my last child, my husband gave me the choice of giving up the pregnancy and remaining his wife, or separating from him if I wanted to keep the child. At the time, I only had two children, and I decided to carry on with the pregnancy, a choice that marked the end of my relationship with him. I truly couldn’t understand why he was so cruel and unyielding. Then, in 1997, when I lost my job because of sickness and, at the same time, my son Brian manifested the initial symptoms of tuberculosis, I began to have my first suspicions. The next year, I got worse. In the Nsambiya hospital, I was examined and tested for AIDS, and showed up HIV-positive. That was when I understood why my husband hadn’t wanted the pregnancy with Brian, because back then he had known that he was HIV-positive.
“Life at home with my three children became even more difficult. The two older boys were healthy, but we didn’t have enough money for school. We didn’t have food or money for medicine and, worst of all, we didn’t have love from anyone anywhere in the world. I really didn’t know whether God existed. In 2001, someone directed me to the International Meeting Point, where I encountered women with such joy on their faces, even though they too were sick with AIDS, that I found it hard to believe. They danced and were glad, and I wondered how anyone with this disease could sing and dance. At the Meeting Point, they welcome all with music and songs from different peoples–African, European, and Indian; I even heard some from my own tribe. After a long time, I began to see a glimmer of light shining on my ruined life, so I continued spending time with them.
“An important thing I’ll never forget is the day someone looked at me with a gaze shining with hope and love. In all the time I was bedridden, all my friends, relatives, and even neighbors looked at me and my children with rejection and contempt. This gaze of love and hope showed me something that brought life to my spirit and my ruined body. It told me, ‘Vicky! You have a value, and your value is greater than the weight of your sickness, greater than death.’
“In 2002, I began buying medicine for my child, who was on the verge of death, after taking him out of school because of the seal of discrimination they’d set on him: they’d nicknamed him ‘skeleton.’ In 2003, I began buying medicine for myself as well. I weighed 99 pounds, and now I weigh 165. Now Brian is truly healthy, and has begun going back to high school. My oldest son is attending the university, and the second is in the fourth year of high school. Where is the power of death? It is in the loss of hope and the lack of love. Now I am a volunteer at the Meeting Point, and every time I receive people I tell them that the value of life is greater than that of the virus they carry within their bodies. This affirmation nurtures the hope of people who are suffering and about to die, and brings them back to life. All these results have been possible because I have taken on the garment of something beyond death–in particular, love. I want to thank all the people who have educated us, even if we’ve never met them in person. Today, in the name of Fr. Giussani, Fr. Carrón has come among us, who were poor and forgotten. Who is richer than us now? We are the richest people in the world, because someone has brought a smile to the face of at least one person.”32

I keep this present in my mind; these are the friends who give me companionship, even though I probably will never see them again. After having found people like this, there’s no circumstance that I can’t look at face on; everything can change if you look with this wide openness that Christ has made possible. This is for each of us, in any circumstance. Maybe we would be smart to embrace it.