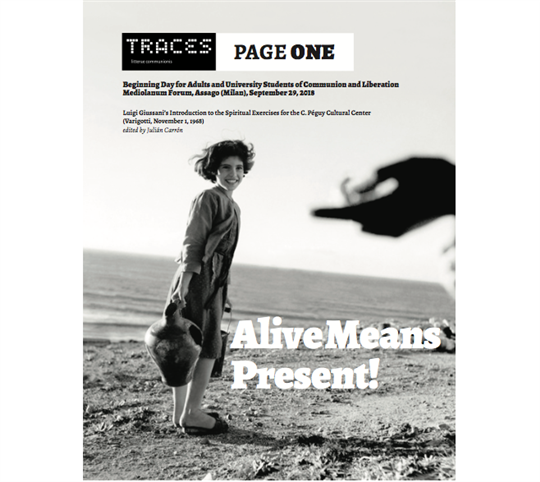 We cannot take beginning again for granted–it’s a grace and an unequivocal sign of God’s care for each of us. How moved and grateful we feel in recognizing that we have not been abandoned to our nothingness! But each of us has welcomed that grace by the very act of coming here today. So, let us ask the Holy Spirit–who is the wellspring from which that action flows–to break us wide open, opening our entire “I” to welcome that grace; and let us ask Him that this grace in us not be in vain.

I welcome all of you present here, and those of you connected by video.

This year, we mark 50 years since the upheavals of 1968, which, as we all know, was a real turning point (Benedict XVI called it a “caesura”–a major break in our recent history) which, despite having begun due to justifiable concerns–a need for greater authenticity and freedom–ended up pushing our entire society into crisis.

Today we are facing another major turning point, which Pope Francis has defined as an “epochal change,” characterized by what we’ve called a “collapse of certainties” (we’ve repeated this many times over the last few years, with ever-increasing awareness): what seemed obvious and taken as a given just a decade or two ago, the very foundations of our personal and social lives, is now no longer evident to the majority of our contemporaries.

The most immediate consequence of this turning point is an overwhelming confusion we can all perceive. One of the most influential German sociologists, Ulrich Beck, attested to this in his last book (published posthumously). He stated that “the world is unhinged. As many people see it […] we are wandering aimlessly and confused, arguing for this and against that. But a statement on which most people can agree, beyond all antagonisms and across all continents, is: ‘I don’t understand the world any more’” (The Metamorphosis of the World, Malden, MA: Polity Press, 2016, xi).

Many people are asking themselves, “How can we begin again? What is our starting point?” Because of all this, I was very struck listening to a talk Fr. Giussani gave during a meeting with that core group of adults involved with the Péguy Cultural Center, who would later become Communion and Liberation. It’s November 1, 1968, in Varigotti. We’re at the height of the crisis that infiltrated GS that same year. Giussani is speaking right in the midst of widespread bewilderment, asking himself: From what starting point can we begin again? What is truly capable of sustaining our lives in a time of such great confusion? What can withstand the test of time? His response is contained in the words we’re about to hear.