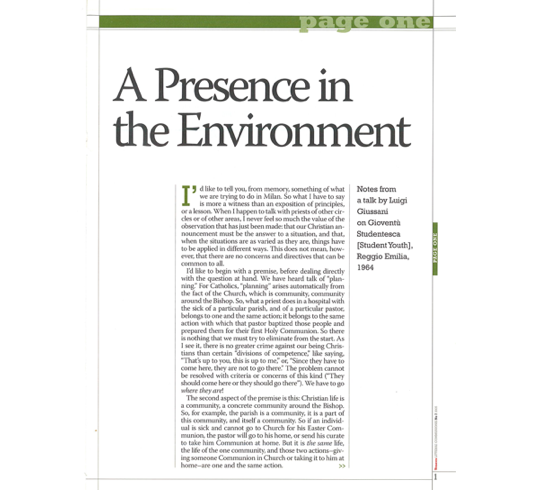 I’d like to tell you, from memory, something of what we are trying to do in Milan. So what I have to say is more a witness than an exposition of principles, or a lesson. When I happen to talk with priests of other circles or of other areas, I never feel so much the value of the observation that has just been made: that our Christian announcement must be the answer to a situation, and that, when the situations are as varied as they are, things have to be applied in different ways. This does not mean, however, that there are no concerns and directives that can be common to all.
I’d like to begin with a premise, before dealing directly with the question at hand. We have heard talk of “planning.” For Catholics, “planning” arises automatically from the fact of the Church, which is community, community around the Bishop. So, what a priest does in a hospital with the sick of a particular parish, and of a particular pastor, belongs to one and the same action; it belongs to the same action with which that pastor baptized those people and prepared them for their first Holy Communion. So there is nothing that we must try to eliminate from the start. As I see it, there is no greater crime against our being Christians than certain “divisions of competence,” like saying, “That’s up to you, this is up to me,” or, “Since they have to come here, they are not to go there.” The problem cannot be resolved with criteria or concerns of this kind (“They should come here or they should go there”). We have to go where they are!
The second aspect of the premise is this: Christian life is a community, a concrete community around the Bishop. So, for example, the parish is a community, it is a part of this community, and itself a community. So if an individual is sick and cannot go to Church for his Easter Communion, the pastor will go to his home, or send his curate to take him Communion at home. But it is the same life, the life of the one community, and those two actions–giving someone Communion in Church or taking it to him at home–are one and the same action.
Analogously, children go to school and are introduced to the world of knowledge, they are led to become aware of the context of their life in a far superior way than they can currently do at home or at the parish youth club, or even in Catholic associations. Fine, so the Church, the Bishop, maybe sends a priest, not to take Communion to a sick person at home, but to bring religion into the school. It’s one and the same action. It’s in your interest as a pastor that the student be involved in the most adequately Christian way in the environment that has most influence on him and is helped to meet it there. It is the same action! The same applies to the case of a student who comes to me in school and doesn’t listen to me, because he doesn’t like me, and closes his ears during religious lessons or studies Latin instead (and there’s nothing I can do about it, because I would end up putting him off for good, and so I try discretely to take no notice), but he likes the curate in his parish, goes to Communion in his parish, frequents the associations in his parish and does not get involved in the Christian movement I am trying to promote in my school. I say, “Just as well he goes there!” It’s the same thing! The greatest humiliation for someone who tries to work for the Kingdom of God, which is one, for someone who is trying to work for his Bishop (because the Church is in the Bishop, period), the greatest humiliation is to be considered a deserter by his confreres, “a subversive,” or an individual who is only trying to build his own world. His action is the same action as that of the others!
So, with what criterion do we distinguish our field of activity? What criterion do we use in order to decide what to do, whether to go here or go there, if we should call them here or call them there? The criterion is the basic Christian principle of Incarnation. For Christianity, a certain method is essential, and that method is Incarnation. As truth, He could have remained the Word of God and He would have been the truth all the same; what is crucial about Christianity is that particular way of communicating itself, and the first characteristic of this method was precisely the kenosis, God’s condescendentia, St. Jerome called it; in other words, adhering to man.

To make the Church present
in every environment
First of all, as we said earlier, the Kingdom of God does not go ahead thanks to our work, but through the power of God. There is no comparison possible between the communication of the Mystery and our work, with our natural work, in so far as it is human. Now, how does this power of God operate in the world? Through Jesus Christ. But not through Jesus Christ the man of two thousand years ago, but the whole Christ, the risen Christ, Christ in His mystical body, the Church. So it is through the presence of the Church as such that Christianity spreads. Through the presence of the Church as such: we have to make the Church present in every environment. But the Church is not an individual who believes certain things and on Sundays goes to his parish to perform certain functions. The Church is more than this! In order to be present in an environment, the Church must translate, incarnate her characteristics in that environment, and these characteristics boil down to two: first, unity, a tangibly expressed unity, a community, a community of the Christians in that environment; second, a community bound to the Bishop, led authoritatively.
I said I wanted to sum up the directives to be followed in these two criteria from a methodological point of view. I wish however to stress the value of the first: Christianity is a new life, it’s a new way of living, which is to say of perceiving, of judging, of feeling, of reacting and of manipulating things. It is a new way of life, a new way of living, not individually but essentially as a community. So, that the Church is present in an environment means that in that environment the Christian community is present as life, that the Christians live the life of that environment in everything, honestly, in every detail, live the interests that make up that environment, but from another point of view. It means that this other world is present in the world. Perhaps I am “integralistic,” but I would like someone to demonstrate that this is not how things are. Up to now, no one has convinced me by their objections.
A piece of the Church has to be present in the environment; we have to urge Christians to get together so as to live the interests that pack, that form the tissue of life in that environment, from a different point of view, in a different way, “together,” because this togetherness is essential in order to be Christians. Even if there is only one Christian in a school, his activity is a witness only in so far as it tends to express itself in community and lives in hope that the grace of God may give him others with whom to join together. Otherwise, we shall have positions that are socially evolved, psychologically clever and ascetically robust, but not yet typically Christian.
I have said how we started and how we keep on trying to start. We call on the students who call themselves Christians and those who want to decide whether or not to remain Christians, to make them able them to judge Christianity objectively, and tell them: “Get together, get together under the leadership the Bishop has set in place, and try to live together, under that authority, all the interests that your life as students is made of.”
This is the criterion we try to follow, trying to model ourselves on the method the Church uses and makes obligatory. Why did the Church create the parish? It wasn’t Jesus Christ or the Apostles who created the parish! Why did the Church decide on it? Because of the very same law: in order to incarnate Her mystery in the environment in which man was living. If the mobility of the social set-up changes the context that affects the individual, then the way the Church interacts in the environment has to change. For example, in Italy where the individual is still very much bound to the family environment, the parish is very solid, but abroad, where things are different, there is much more hostility to the parish. Even here in Italy, though, people defend the parish because of its usefulness, otherwise it would no longer be a matter of readiness on our part, and the law would no longer be for man, but man for the law.

Christian life is a “we”
So, it is the rediscovery that Christian life is not “I and God,” but is a “we”: (“For me to live is Christ”). The quotation we used above is, as it were, the gnoseological consequence of this truth: that we are one, we are all one thing because we eat the same bread; we are a world within the world, a community in the world, a society in the world. Integralism? It seems to me merely the theological definition of a Christian.
This is why Jesus Christ said, “I pray You, Father, that they be one so that the world may believe that You have sent me.” The world becomes aware of Christ, the Christian announcement is only in as much as the world sees us living a truly communitarian life; sees this absolute miracle, because a communitarian realization of this kind is inconceivable from the natural point of view (with the selfishness that is around us).
It is exactly this that I really care about. The point of the proposal, the first directive I spoke of–the hint for the “get together” proposal and the community, once it is in place, serves for reminding the others; and secondly, it is something that takes hold of the whole of life. Christianity is not a community that performs particular activities, it is no longer particular activities, but a habitual way of life. The dialogue with the world (and this is what I struggle for and will struggle for more and more), dialogue with others in a pluralistic society, does not require us to forget or break up this community of ours. If other people’s conceptions transform their lives into an “I,” our conception of life transforms our life into a “we.” The dialogue between me and others, between me, a Christian, and others, is the dialogue between “us” and “you.” I say that democracy is respect for freedom of expression; it is not democracy if it claims that I can be Christian “in community” only in church, or when I am gathered in associations, while in public life it has to be only “I”–this would deny my concept of life.