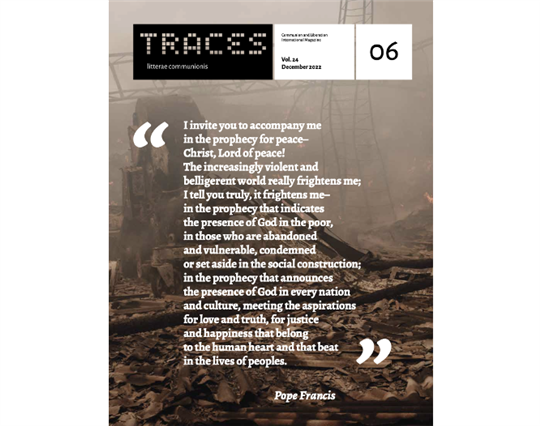 "I invite you to accompany me in the prophecy for peace¬–Christ, Lord of peace! The increasingly violent and belligerent world really frightens me; I tell you truly, it frightens me" (Francis, Audience with Communion and Liberation, October 15, 2022).
We wish to vigorously support the effort Pope Francis is making to find a way to end the terrible conflict in Ukraine, which is a part of that "terrible third world war” (November 13, 2022) on which the Holy Father has long and unsparingly focused his concerned attention.

The tireless search for peace
Nothing is more in keeping with the deep aspiration of the human heart than peace. It is an ideal that can never cease to be pursued and that is not naïve or abstract: the Pope reckons with humanity in its entirety, with its miseries and its lies, its greed and its claim of dominion; and at the same time he does not resign himself to war as the inevitable consequence of tensions between people, peoples and nations. Everything must be done so that war is not the last word and politics does not fatally turn into the continuation of war by other means. Europe, which has long been perhaps the most belligerent place on the planet, has shown in the last phase of its history¬–albeit with many limitations and dramatic repercussions–that this is possible.

There is no peace without justice
Working for peace always takes place in the "here and now," and it must be accompanied by an awareness of the facts and circumstances that characterize the situation. In this sense, no doubts regarding the attribution of responsibility for the war of aggression against Ukraine, as well as the fact that there can be no true peace without justice are permissible.
We perceive with concern that two opposing risks loom: on the one hand, that the bewilderment and fear produced by a near and increasingly violent war will not lead to a desire for peace, but only to be left alone; on the other hand, that the necessary support for the Ukrainian people may be reduced to an instrument of "imperialisms in conflict" (Francis, September 15, 2022).
War only brings death and destruction; it erases the fundamental recognition that the other is a good. Is there a possible path to peace in the current conditions? Yes, dialogue. It is a path that can be undertaken now, even amid the tensions that inevitably remain. When the thread of dialogue is broken, when self-interest becomes absolute, the bottomless abyss of conflict opens up, which leaves only the defeated and sows the seeds of future and more vicious violence.
Therefore, if it is right for Ukraine to defend its sovereignty, firmly rejecting Russian aggression with the necessary aid, it is decisive at the same time that the responsibility of all countries and powers involved in the conflict directly and indirectly be activated, so that a dialogue between the parties may be resumed or initiated as soon as possible, with a view to a peace negotiation in which the realism of justice can prevail, going beyond established strategies.

"The key word is dialogue"
Dialogue is not a fantasy, but the only reasonable way forward. In every situation, even the darkest or most putrid. Pope Francis said this boldly, "It is difficult, but we must not discard it; we must extend the opportunity for dialogue to everyone, to everyone! Because there is always the possibility that in dialogue we can change things, and also offer another point of view, another point of consideration. I don’t exclude dialogue with any power that is at war, even if it’s the aggressor... sometimes dialogue has to be done in this manner, but it has to be done; it “stinks”, but it has to be done. Always one step ahead, an outstretched hand, always! Because otherwise we close off the only reasonable door to peace. Sometimes they do not accept dialogue: too bad! But dialogue must always be done, at least offered, and this is good also for those who offer it; it helps them to breathe.” (September 15, 2022).

"Prophecy for peace"
The Pope's is both a prophetic and realistic stance. It calls everyone to responsibility, both those who perform governmental tasks and those who, like most of us, face their daily tasks day in and day out. In order to stand with the Pope in the prophecy for peace, we desire to mature the awareness, educated by the Church and its witnesses, that peace is a good for all people, and the willingness to be authentic builders of it through our own lives. This is what Fr. Giussani said after the 2003 Nassirya massacre: "If there were an education of the people, everyone would be better off."

For these reasons, we are committed to promoting gestures of prayer and public moments of discussion that can foster a deepening and greater understanding of the value contained within Pope Francis' judgment on what is happening. It is a contribution we offer to all to sustain hope in that true peace that the whole world awaits.