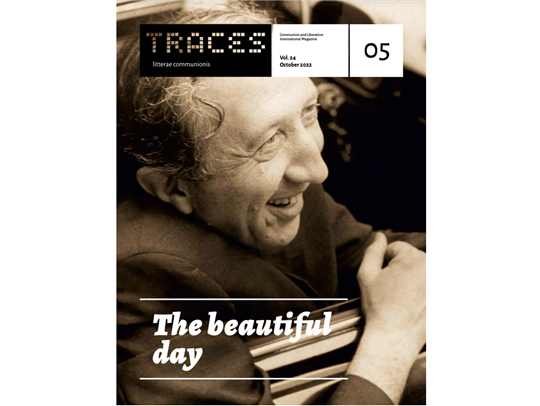 “The present moment, from then on, was no longer banal for me.” This was the newness introduced in a watershed moment in the life of Luigi Giussani in his first year of high school, when what he called "the beautiful day” happened. His story of that day appears in the first article of this issue, which comes out near the date of his birth, October 15, 100 years ago.
The Christian announcement reached him at the age of 15 as the only answer worthy of his heartrending longing for the infinite. Even at such a young age, he perceived this mystery in himself so powerfully that he considered a man who lived 200 years before, Giacomo Leopardi, to be his friend. For one month, Giussani immersed himself in Leopardi's poetry, eventually calling him “the most striking companion along my religious itinerary.” If Giussani had not felt in all its urgency the expectant awaiting that constituted his heart, he would not have recognized Christ as the most important presence for him and the world.
The encounter between his humanity and Christ marked the beginning of the story that God worked in him through his thought and apostolate, making him a witness to the words of John Paul II: “There will not be faithfulness if it is not rooted in this ardent, patient and generous search; if there is not in man's heart a question to which only God gives an answer, or rather, to which only God is the answer.” Giussani passionately loved the seriousness of the human question, exclaiming, “Even when this entreaty is intentionally alive, how much do we forget in the heap of minutes and hours that make up the day! How far we wander away from ourselves during the course of our life’s journey!” He went on: “And so as not to forget who we are, the answer must be present.”

For many, a great many, the “beautiful day” happened when they came upon the life of Giussani, which was so full of the reality of that “day.” Incarnating it in the way he lived in reality, Giussani showed everyone what Christianity is: an event.
As Pope Francis said in his audience with the Movement in 2015, “You know how important the experience of encounter was to Fr. Giussani: the encounter not with an idea, but with a Person, with Jesus Christ.” In the magazine, we propose some passages documenting the intensity with which Giussani lived each instant, even the most ordinary moments–this “now” that we all live. You will also find testimonies of people who, touched by Giussani’ s experience of faith, began to believe in Christ in a way that was persuasive for others, people who attract others “to discover–or to see more easily–how Christ is a presence.” As Davide Prosperi reminded us in his letter of invitation to the audience with the Holy Father on October 15, “We exist only for this.” We prepare for the audience by becoming more aware of the gift we have received in the life of Fr. Giussani, and “continuing to beg, first and foremost for ourselves, for Him who alone can fulfil the thirst of the human heart: Jesus of Nazareth.”