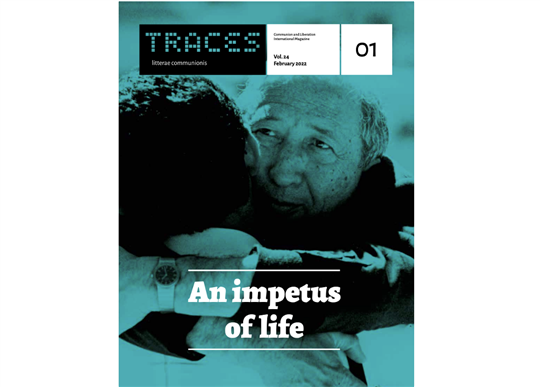 “Christ ‘bumped into’ my life, my life ‘bumped into’ Christ, precisely so that I should learn to understand that He is the central point of everything, of the whole of my life. Christ is the life of my life: in Him is summed up all that I would desire, all that I look for, all that I sacrifice, all that develops in me out of love for the persons with whom He has put me.”

This issue marks the beginning of the centenary of Fr. Luigi Giussani (1922-2005). His words quoted here describe the affection that sustained his whole life, that deeply moved his reason beginning when he was a boy, that filled his heart as he walked up the steps of the Berchet High School with the desire that those young people would be able to learn a method for judging everything and being free. This affection shaped his obsession “not to live uselessly” into a fecundity toward everyone, into an impetus of life that was not the product of will or temperament, but of satisfaction.

“Neither structures nor organizations nor initiatives will suffice,” he said; the only thing capable of changing human beings and the world is “a different and new life.” From the consciousness of the gift that had crashed into his life, a great, complex story emerged, full of limitations and beauty, a story that reached the farthest places by unexpected roads, and, as he said in 1987, was so “not his” that it filled him with “a wonder even greater than that of the beginning itself.” A hundred times greater.

This is why his proposal challenges our lives, asking that each of us verify it against the hundredfold promised by Christ. It is an incessant invitation to start out from experience. Nothing could deter him from recovering Christianity, which is a present event worthy of the infallible expectant awaiting of the heart. “In a fragmented world” in which “answers are given even before the questions are asked, Giussani returns to the question,” as the apostolic nuncio in the United States, Christophe Pierre, said in the conversation that opens this issue. Giussani’s insistence on not separating reason from experience, the meaning of life from concrete existence, impacts the heart of our time, which believes in everything and nothing.

Every ideal is judged without being discounted by the passing of the years, and is invalidated or confirmed as true in a comparison with every historical situation. Giussani’s ideal either lives in the present or it does not exist. So then, how is that “different and new life” an experience today? This is the question we asked those who encountered him in the most varied of ways, some even without ever having met him in person. Throughout this year we will document what happens in the magazine and on clonline.org through the testimonies and contributions of everyone.

For this reason we propose again the questions Julián Carrón asked at the most recent Spiritual Exercises of the Fraternity of CL, which invited us to look at the centenary: “We are not interested in this celebration if not for an essential reason: to bear witness to what Fr. Giussani has generated in us. What does Fr. Giussani have to do with the many challenges we face? What does his paternity generate today?”