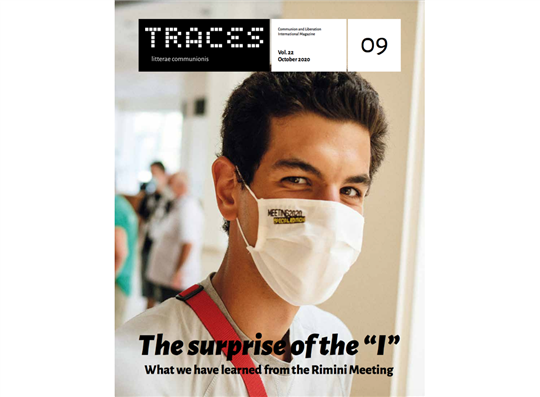 There is nothing more wondrous than seeing the flowering of a person’s humanity. Certainly, it almost always happens in a subtle and hidden way, growing a bit at a time, step by step, and one hardly even realizes that it is happening. With only a few exceptions, this process takes place far from the grand stage or the spotlight, but at a certain point it becomes evident. When you find yourself in front of a person on a journey, a person who is mature, and not necessarily in terms of years, you see it. It stands out, and it is all the more visible in a difficult situation like the one we have been experiencing for months, which seems custom-made to strike fear in our hearts, to block all initiative, and make every impetus vanish into nothingness.

In these months of acute seasickness, in the midst of the waves of the pandemic and attempts at starting again, we have seen many people like this, fearless and hard at work. Above all, we have seen them at the Meeting of Rimini, to which this issue of Traces has returned in order to look more deeply at that unforeseen dynamic that enables hundreds of women and men throughout the world to make space for an unimaginable creativity, from the organizers to the guests, from those engaged in Rimini to those who followed everything in scores of squares in locations throughout the world. They are links in a chain of surprising choices, but they are above all a series of “I’s” who took initiative, not letting themselves be held back by difficulties. What enabled this? What is the origin of their actions?

This same theme runs through the rest of the articles in this issue, from the testimonies in the letters to the report from the U.S., marked by an electoral vigil of unprecedented drama, and in the story relating the facts and episodes that have occurred in recent weeks in very different places but share a common thread: there are people at work whose lives are not prey to nihilism, that subtle fog that envelops our hours with emptiness and doubt (“Is it worth it? What’s the use?”), but rather, are grounded in a reality lived “intensely,”to use an expression dear to Fr. Giussani, because a little bit at a time, something other emerges in this reality and prevails. The true adventure, then, is to know this other ever more deeply and to be willing to follow it and allow ourselves to be changed. This is what causes our humanity to flower.