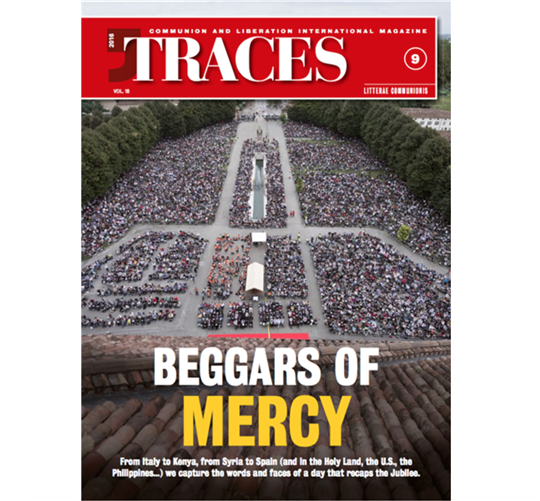 The day is approaching. In little more than a month, on November 20th, Pope Francis will close the Holy Door. The Year of Mercy will be over, at least in form. But there is nothing greater and truer, nothing that speaks to us better about God, than something that passes through the form of our finiteness (the space of a door, the time of twelve months) to expand it, transfigure it, to make that same form become an impressive sign of the infinite. This is what the Jubilee has been. Many times in recent weeks we have heard people say, “How nice it would be if this Year went on longer.” Not for sentimental reasons, or out of attachment to the liturgies, the papal teachings, or certain moving moments, but because this Year of Mercy has evidently touched the depths of a real need, and thus people wish that such a powerful response to our thirst for forgiveness would never end. Well, the beautiful thing is that this is truly so. God’s forgiveness is eternal. It is always the time of mercy. And this gift that the Pope has given his Church, this Jubilee that all of us needed–and need–so much without realizing it, has served precisely to make us aware of this fact. A few weeks ago, at the Marian Sanctuary of Caravaggio, and in many other churches around the world, the CL Jubilee Pilgrimage took place. It coincided with the beginning of the academic year, with the normal resumption of ordinary activities, and the journey of every day. This was no coincidence. “There is no journey without mercy,” said Julián Carrón, the leader of the Movement. “Without forgiving and being forgiven, no relationship would have the chance of lasting.” Without the embrace of Christ at descends all the way to the abyss of our limitation, as happened with Peter, we simply could not live. “I do not understand how one can think it possible to make a journey without returning to the ‘yes’ of Peter,” Carrón continued. “Otherwise, how can we start anew? There is no possibility of morality, no possibility of attachment without a Presence.” For this reason, a “particular story [...] is the keystone of the Christian conception of man, of his morality,” as Fr. Giussani said. Because “mercy is a person. Mercy has a face. It is called Jesus Christ and it reveals itself in the relationship with you as it revealed itself in the relationship with Peter. Even with all his mistakes, his failures, his betrayals, none of this was an objection. None of all this is an objection. [...] We can take up the journey again only if He once again draws us to Himself.” A particular story. A face, an encounter, is the way Christ’s mercy reveals itself, attracts us to Himself. It seems so small, and yet, when it happens, it changes everything. The fog melts away. You walk. Even the widespread uncertainty that grips our world lessens, that “existential fear” analyzed so well by Zygmunt Bauman, one of the most lucid intellectuals of our times, in the interview you will read in these pages. Even in the midst of the powerful epochal changes of our time, you can receive the certainty that is necessary for living, as shown in the simple stories of Student Youth kids, and in the many other testimonies you will find in the magazine. They are particular stories, everyday stories, which may seem insignificant at first sight. But they happen, and in happening, they point out a road for everyone.