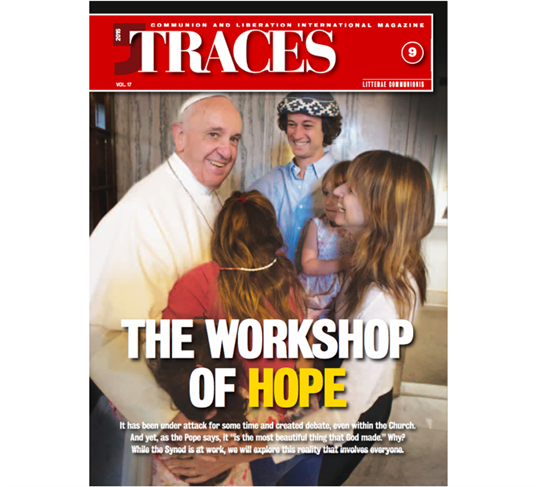 It was a historic visit for multiple reasons, and the article found in this issue of Traces captures them well. Amidst the meaningful moments of Pope Francis’s trip to Cuba and the United States, one stood out as particularly touching for mothers and fathers. It was in Philadelphia, at the World Meeting of Families. During the festival, the Holy Father–as he is won't to do–set aside his prepared speech (which, by the way, was also beautiful) and spoke off the cuff. He told the story of the difficult question a child once asked him (“What did God do before he created the world?”), about the Love “so overflowing” that it had to “come out of” itself; aboutCreation.And later, about the “most beautiful thing that God made...the family. He created man and woman, and He gave them everything.”

There could be no better introduction to the Synod on the family. It’s the second in the course of two years.It’s been highly anticipated by the media–which are already speculating who will win, the “progressives” or the “conservatives”–and even more by the faithful, by God’s people. Not so much for it to untangle the increasingly complicated questions put in front of us by today’s society (such as the issue of Holy Communion for the divorced and civilly remarried), but because the family is really in need. It needs to be defended and sustained because “we cannot call any society healthy when it does not leave real room for family life,” as Francis reminded us. What it needs first of all is help to rediscover itself–its strength today, as always, is the enormous power it has. The first way to help in this rediscovery is to stop talking about it in the abstract, “reducing it to an ideal model,” as sociologist Chiara Giaccardi notes in the interview that you will find in this issue. Family is first of all a life, a “concrete-living,” as Romano Guardini said. It’s a very human place–the most human of all–full of wounds and limitations. Yet it’s also a place–perhaps the only place–where it’s still possible to learn day in and day out that our frailty and limitations are not what define us, but rather, an opportunity for growth. It’s like the knot that binds a net together: living within it we can recognize that being tied to others, being in relationship, helps us to become ourselves. It’s an environment whose true strength is in the ordinary.

There’s yet another reason the family is a vital topic today, both inside and outside of the Church.The Pope spoke about it again with the American bishops, when with simple realism he noted that “until recently, we lived in a social context where the similarities between the civil institution of marriage and the Christian Sacrament were considerable and shared. The two were interrelated and mutually supportive. This is no longer the case.” Here too we see the evidences of the past becoming blurred; they are no longer crystal clear for everyone. We could sit and mourn times past, the Pope says, taking refuge in phrases like: “‘It was all better back then,’ and ‘the world is falling apart and if things go on this way, who knows where we will end up?’” Or, he continues, we can choose “to accompany, to lift up, to bind up the wounds of our time.To look at things realistically, with the eyes of one who feels called to action, to pastoral conversion. The world today demands this pastoral conversion on our part.”Conversion. And witness, because “a Christianity that ‘does’ little in practice, while incessantly ‘explaining’ its teachings” becomes “a vicious circle.” We need to “show that the ‘Gospel of the family’ is truly ‘good news’ in a world where self-concern seems to reign supreme! Families transform the world and history.” Francis closed the speech saying: “If we prove capable of the demanding task of reflecting God’s love, cultivating infinite patience and serenity as we strive to sow its seeds in the frequently crooked furrows in which we are called to plant–for very often we really do have to sow in crooked furrows–then even a Samaritan woman with five ‘non-husbands’ will discover that she is capable of giving witness.And for every rich young man who with sadness feels that he has to calmly keep considering the matter, an older publican will come down from the tree and give fourfold to the poor, to whom, before that moment, he had never even given a thought.” This is Christianity. This is what the Synod is in service of, and this is what sustains the life of the family.