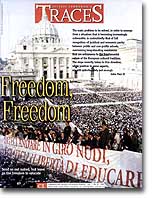 The enduring cry that was raised by the crowd gathered together with the Pope in St. Peter's Square last October 30th is the most meaningful sign of our times.
Freedom. In this century of ours that is running out, there has not been a word more often invoked or more loved, and yet at the same time more misunderstood and betrayed.
With these words, the public gesture in support of freedom of education, which brought 200,000 people to Rome, revealed its true underlying significance: a manifestation for the good of all.

1. People didn't come in such great numbers to ask for some advantage or concession from the government: freedom is not something granted by those whose turn it is to be in power, but is the energy which makes a person or a people exist, the energy that leads them, in different ways and circumstances, in their search for the true meaning of life. It is the force that makes them builders of history and invincible in the face of attempts to reduce them all to uniformity.
Therefore, what is implied is freedom to exist, and so to build. This was the most important poit emphasized on October 30th.

2. At every level of personal and social existence, true freedom is struggling to fulfill itself. Its realization, in fact, sets the terms of a fight against the dominion of preconceptions, appearances, and dreams of cultural and political hegemony.
Freedom! This is the cry of those who exist and who understand what kind of unique adventure and historical responsibility resides within the human condition. The free emergence of educational proposals is thus the good immediately dearest to the heart of anyone who cares deeply about the concrete fulfillment of an ideal of freedom.

3. For us this battle has its roots and its reasons for being in a faithfulness to-which is a trust in-the story of a Movement that has been in action for fifty years now, that has taken up the long educational tradition of the Church, and for which the prophet Jeremiah's appeal, "Yahweh says this, 'Stand at the crossroads and look, ask for the ancient paths: which was the good way? Take it and you will find rest for yourselves'" (Jer. 6:16), has never seemed strange or foreign. This is a Movement of Christians that owes its vitality ("incomprehensible" to many) to just this educational risk taken by the one who started it. So, forty years ago, it was possible to hear in the halls of a Milanese high school the same words that could be read on a banner in Piazza San Pietro: "Send us out naked, but leave us the freedom to educate." So, between the Meeting for Friendship Among Peoples (in Rimini, Italy, in August, where the challenges of education and school parity were discussed), the assembly at Palavobis Arena in Milan (also for private school subsidiarity), and people's petitions, there has never been a lack of continual recourse to this tradition, which coincides with the nature of the movement itself.

4. Today, the awareness that this battle can unite, rather than divide, Catholics and non-Catholics is more widespread. This is demonstrated by the authoritative contributions made by well-known national lay figures-from Angelo Panebianco to Sergio Romano, from Cesare Romiti to Giorgio Fossa-on the occasion of the October 30th manifestation. It is a sign of tolerance on the part of secular society that recognizes and weighs fairly the other side's reasons-that is, a sign of recognition of the value of a society that builds from the grass roots up (in collaboration and not in competition with the government)-and finds in the term "subsidiarity" the keystone of the battle for freedom of choice in education. A battle not only for freedom of choice, but also for improvement in the quality of all schools, whether public or privately run.
And yet, due to ingrained prejudices and shortsighted calculations for grabbing or maintaining power, there are those who are still deaf to this cry. But by now the cry of "freedom, freedom!" has resounded also in public, in front of a Pope who aroused it with his words and who listened to it long and hard.