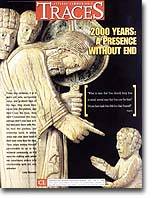 Everyone is talking about this New Year's Eve. It is the usual topic of conversation at work, at home, among friends. Far fewer people are talking about the Jubilee that is about to start.
This is natural, and not only because the New Year marking the millennium is clearly a rich business occasion, "blown up" by the mass media. There is the fact that most people think of passing time with a sense of dizziness, like looking down into a void. Time seems empty, even if it is full of tasks and duties to be performed; our century has had among its leading challenges the problem of boredom. The lack of meaning of time must thus be exorcized in some way, no matter how. And it is evident to everyone that this lack of meaning is life's worst enemy.
Lack of meaning can go so far as to kill, to take away one's will to live. Empty time is a thief, more than a gentleman.
The great English poet T.S. Eliot warned that "without the meaning there is no time."
Certainly, time can be filled, "killed" in many ways, by organizing it into periods, recurring events, anniversaries. But without the meaning there is no time, there is just a casual whirl of instants, a dispersion.
Thus, everyone is talking about this New Year's Eve and the preparations for it. All kinds of things are being organized, in the poignant and labored attempt to affirm life against the void of time.

The Jubilee, too, is about to start, and few have understood what it is all about. But understanding what is behind this Jubilee is the best way possible of truly toasting the new millennium, of being truly content, without masking boredom.

The opening of the Holy Door which will take place on Christmas Eve in the Basilica of St. Peter's recalls the opening of another door: that of the house of Jesus, where the first two disciples, John and Andrew, found themselves standing after they asked Him where he was staying. "Come and see," He said. And for them and through them began the great adventure that has brought men of all times, and us too, to know the exceptional benevolent gaze that Christ has for life, once felt the attraction of His personality.
The Jubilee is the true festivity, the authentic celebration of life. This is because it is the recurrence, as Eliot says, of an encounter, of "a moment not out of time, but in time, in what we call history, and that moment of time gave the meaning."
The Church, too, offers a festivity, but in contrast to the others it is not "against" time or a way of evading, of forgetting. It is in history, to sustain the difficult hope of mankind.