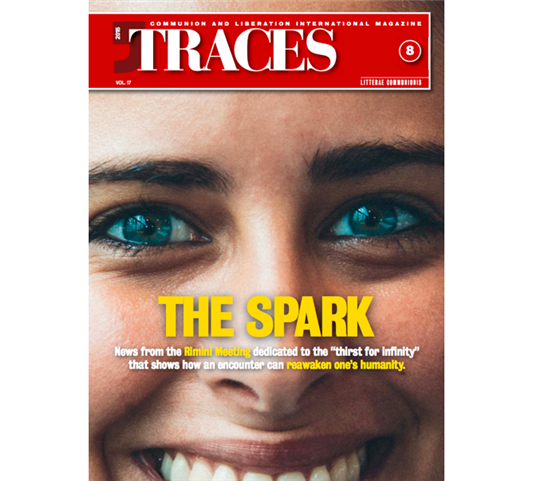 An image made its way around in the last month. It was of Aylan, the three-year-old Syrian child who drowned while traveling to the West and was found by a Turkish police officer on the beach in Bodrum. It’s impossible to look at that image without feeling pierced, without a cry welling up within:why? We saw it again and again, with the tale of his family’s tragic plight. The question was dissected by the press: should they publish it or not, was it right to make their life into an icon like other images that made a mark on people’s hearts, and so made their mark on history? Amidst all the discussion, often disconnected from reality, another question arose: if this doesn’t get to us, if a fact like this doesn’t make us aware of ourselves and the world around us in torment, what can?

Then, little by little, that cry, like many before it, fades. Inevitably, we move on to other things: other stories, other tragedies. Other events that fall into the category of “emergency,” a word so exhausted by use that it’s no longer in individual headlines, but rather one of the permanent subheadings written above a story to let us know the topic of the article. It is just a “category.” Still, that question of why remains intact. It’s the same question that Fr. Julián Carrón posed some days ago to a group of CL responsibles: “It’s not that reality is missing. Reality is constantly provoking us. If we remain in indifference, it’s because the ‘I’ is missing. So, what is it that reawakens it?”

At the Rimini Meeting, there was a lot of talk about various crises: Syria and the Middle East, Islam and religious dialogue, Europe, the economy, education… in other words, reality wasn’t missing. Instead, the deeper, more fundamental questions were also addressed. Pope Francis, in his message, phrased it like this: “In the face of our numbness in life, how can one’s conscience be awakened again?” How do we cultivate that “healthy restlessness” that we find inside, those questions that reside in the heart of every man and woman (he listed a succession of beautiful examples), that lack that reminds us “like the chime of a clock,” that we are made for something great? That we “thirst for God?”

There is no ready-made answer, and there are no formulas or procedures to repeat to guarantee success on their own. Francis reminds us of this, as well, when he says, “for the Church this opens up a fascinating journey, as was the case at the beginning of Christianity.” It’s an adventure, a road to discover when it appears that everything around us is falling apart. In Rimini we saw something happening: in the encounters onstage and off, in face-to-face meetings that inspired unlikely collaborations (Russians and Ukrainians working together on an exhibition, or imams and rabbis in dialogue with a cardinal) in faces whose unimaginable joy was inscribed on our memory (the clearest example was Fr. Ibrahim Alsabagh from Aleppo) and in a myriad of stories that would have been unthinkable in theory, but that happened and are chronicled in the pages that follow. It’s precisely because they were impossible, but happened, that we need to fully consider them, and understand the implications they offer to our intelligence, so they can become firm steps forward on that adventurous road, and not just nice stories we tell, but end there.

One of the protagonists of the Meeting was Abraham, described as the beginning of God’s method. It was the historical moment in which the Mystery called man to say “You,” and going out to meet Him, reawakens humanity to its full stature, with all its questions and thirst for meaning, because “without the Mystery there is no ‘I’,” as Fr. Carrón reminded us. God changes history through a single person.In a way, it’s the same thing we saw happen again in Rimini, both in the spotlight and behind the scenes.We saw snippets of the great adventure, signs of that “fascinating road.” The one we hope to follow.