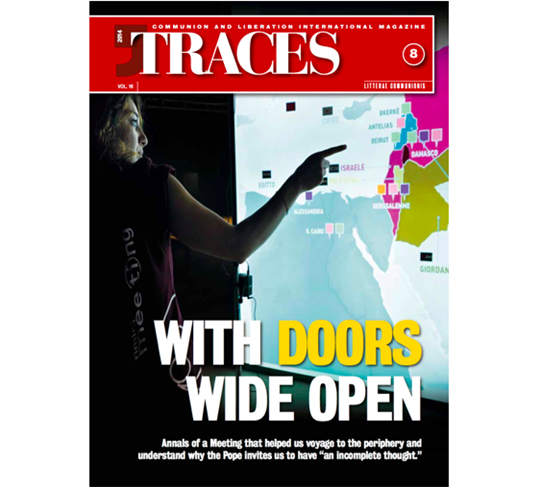 Among the many things that blew us away at this last Rimini Meeting, one image has particularly stayed with us. It was offered to us by Fr. Antonio Spadaro, director of the Italian Catholic magazine La Civiltà Cattolica, in a beautiful meeting dedicated to the pontificate of Pope Francis. Fr. Spadaro told us that one can see the Church “as alighthouse,” a beacon that illumines the way for ships in a storm. “I am here, the harbor is here, safety is here.” And, this is so true. The Church is a rock. It is always indefectible.

But there is another way to give light to those who are in darkness: the torch. A torch does not stand still, but “walks among men, illumines humanity where it finds itself. If humanity moves toward the abyss, the torc moves toward the abyss, it accompanies men in their development.” It is in this way that the torch “may be able to draw man away from the abyss and allow him to see

These words set off tremors in the room and many questions followed. If we separate words from experience one could think that “moving towards the abyss” is a sign of a faith in retreat, a compliant faith that follows the flow of the mainstream culture instead of charging against the current. One may think of a weak Christianity, one that settles for “witnessing” and is, at best, a good example, but that nonetheless is incapable of changing the course of history.

Nothing could be more wrong, indeed, more contrary to experience—to what is happening. In this day and age, in order to “accompany” humanity to the “existential periphery,” that wasteland of lost evidences and confused values that is so dear to the Pope, it takes much more than a correct intellectual position: It takes a livingcertainty. It takes something that happens constantly, something that we can discover and deepen constantly—something that constantly regenerates us.

We need to experience the relationship with Christ. “A Christian is not afraid of being decentralized” because “his center is Jesus,” the Pope reminded us in his message to the Rimini Meeting. This is the only thing that can give us the strength to commit ourselves to the life of another, to accompany another in a more authentic way than just standing at the side of the road and repeating truths. This is what allows us to take joy in discovering what it means to love another’s freedom. It is more than mere respect, it is an authentic love for freedom, because only in freedom can the needs and evidences that constitute our heart reemerge.

The International Assembly of CL Responsibles in La Thuile directly followed The Rimini Meeting. Among the enormously rich things that were said and lived, we listened to the witness of a doctor: a gynecologist who is at the forefront of many controversial topics. She spoke about walking with a married couple that had decided to try artificial insemination and had grown increasingly uneasy with this. At a certain point the husband blurted out, “Doctor, what is man? Because I have the impression that in the most sacred act in the relationship with my wife that something foreign has been introduced.” Here we see that accompanying someone in a discovery that arises from their own firsthand experience is much more useful than many—even important—ethical arguments. As Fr. Giussani said, “A definition must formulate an achievement that has already come, otherwise it will result in the imposition of a scheme.”

The real battle underway is an attempt to recapture what is human, what is true, what is valuable—even the meaning of certain essential words—from within one’s own experience. This is what is at stake in the challenge that awaits us. We can, for example, begin with the family, on which the Church is about to dedicate two synods precisely in order to shed light amidst an enormous confusion.

It will be a long, adventurous work filled with uncertainty because, as the Pope says, it will force us to “look for new forms and methods” to communicate “the perennial novelty of Christianity.” This is a work that has just begun. It is a work that will be useful for us and for all of our human family.