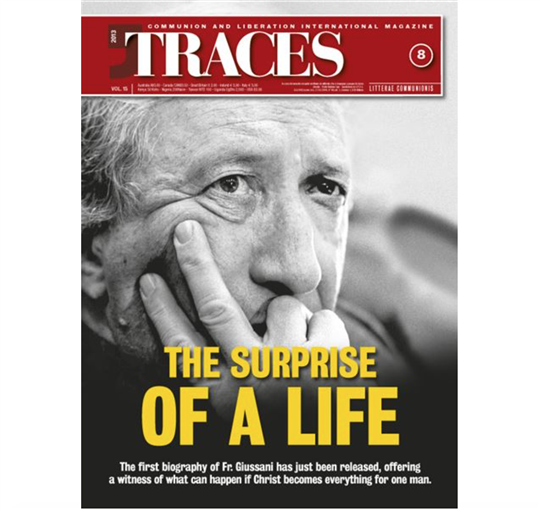 This issue of Traces is going to press while the world discusses the future of Syria. An attack would mean war added to war, death added to death, since violence has been devastating that country for years, noticed more or less distractedly by outsiders, the subject of sterile analyses about who is right and who is wrong. The Pope’s powerful gesture was needed for us to realize the real weight of what is happening in Syria, and to cry for what the heart of man–even that of Cain–demands from God and neighbor: peace. Then you look around, closer, and see other emergencies looming, perhaps less dramatic but in any case suffocating, like a halting economic recovery, unemployment, educational crises... An uncertainty that cuts your legs out from under you, or instead that makes it even more urgent to ask: What are we doing here in the world? How can we, how can I, contribute to solving these problems? What contribution can we make to history?

This is the same question Fr. Giussani asked. It is not by chance that it emerges in the first pages of the very beautiful biography that Alberto Savorana has written about him: “I don’t want to live uselessly–this is my obsession.” This was in a letter from 1945, when he was a newly ordained priest, one of the hundreds of testimonies, documents, and facts that give us the story of a life surely out of the ordinary–marked by a charism–and yet so close to us because, as Fr. Julián Carrón reminded us some time ago, “he lived our same circumstances and challenges.” Through the way he lived these same questions and needs, he offered a road for everyone, and influenced–and still influences–the lives of thousands of women and men.
Just thumb through the pages in this issue dedicated to the Rimini Meeting, the child of that charism, and you will see an important example of what a life like this can bring forth. Think what you may of it, it is difficult not to see the opposite in action in the many divisions that sicken the air. But if we look around, here where we are, we can catch glimpses of dozens of examples like this, of divisions healed, of unexpected friendships, of a humanity that flowers even where it seems impossible, thanks to that road.
“I don’t want to live uselessly...” Fr. Giussani’s “obsession” was granted. As Savorana writes, “His was a rich and full existence, lived without respite starting from the discovery of the Friend who revolutionized his entire life”–Christ. “The Infinite, one, personal Love,” as he called Him in a letter.
It is because of this that he generated and generates, continuing to give a contribution to those who encounter his charism. This happened not because of the power of an organization–it didn’t exist–or because of its social and cultural weight–these too came later, and could disappear tomorrow. No; it was because of his friendship with Christ, which budded when he was a child and blossomed “that beautiful day” (again, his words) in his first year of high school when, in front of the prologue of the Gospel of John, he realized that that Friend was real, that the Word became flesh. “The moment, from then on, was no longer banal for me.”

Drawing attention to this biography is not meant to pay homage to a person who is dear to us, but to realize more deeply what an answer Christ is for our life, and what a contribution we can make to the world when we welcome His friendship. Every instant can be full, not banal, because it is inhabited by Him, and every person can be our companion in this discovery, as a “brother to care for”–the brother the Pope asks us to be attentive to. He was speaking about those in Syria, but above all, about us.