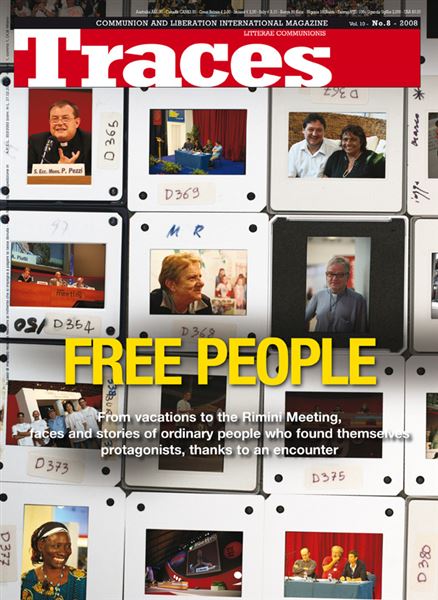 Let’s admit it, the first time we came across this expression, our hearts leapt: “[I]f we don’t feel the urgent need to hear Him, if Christ, His name at a certain point didn’t have autonomy, if He didn’t have an ultimately singular face, marked by unmistakable, unique features, distinct from those He Himself created as sign of Himself, Christ would lose that ultimate, unmistakable singularity” (Fraternity Exercises, p. 30).
In short, Christ would end up being abstract. It was the end of April, at the Exercises of the Fraternity of CL. Among the many questions opened by that event, and taken up in the work over the following weeks, this one gradually became more pressing: What are these “unmistakable features?” What makes us recognize Christ’s face, His “ultimately singular face,” within and beyond the signs of reality?

Perhaps it’s too soon to say it, but the clear impression is that, for many, the desire to discover that face, and with it the need for faith, “the exasperated tension toward crying out His name,” slowly, step by step, is becoming familiar. It’s enough to look at the facts that speak to us in this issue–first of all, the stories that made up the Meeting: Vicky, Rose, Marcos and Cleuza Zerbini, Fr. Aldo, and the prisoners. But there was also Andrea Aziani, another witness before whom it was impossible not to ask, “How can he live this way?” Or again, the road traveled at La Thuile, in the International Assembly of the Responsibles, which dug deeper into the itinerary of faith as awareness to the point of reaching just there, precisely those “unmistakable features.” All facts so powerful, and so correspondent to our need for happiness, that it becomes simpler and more frequent for us to go beyond the signs and ask ourselves: Who makes them possible? Who is making them happen now? Who is behind this powerful reality we are experiencing? Because now the point is this: if we are honest with our experience, with our need and with what is happening, we cannot explain what we have seen and heard without reaching the point of saying, “Christ.” We cannot account for reality, for this continuous series of miracles that reality is, without beginning to recognize–albeit in a blurred, fleeting, confused way–the unmistakable features of His face.

Before the summer, we parted company with Fr. Julián Carrón’s instructions: “When we meet in September, we have to tell each other facts, things that have happened and that have made us aware of Him at work.” September is here. Thank God, there are many things to tell of, for those who read them with an open heart, and for those who no longer ask themselves, “What should I do?” so as not to lose the taste for life, but rather, “Where should I be?” and, above all, “Where should I look?” It’s a good start. Or, rather, it’s the only true start.