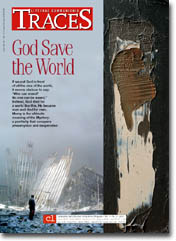 The terrorist acts perpetrated on the United States represent, first of all, a horrendous surprise. The symbols of power in the world were demolished, bringing thousands of dead down with them. It is as though the power, the greatest display of the human ability to construct, were impotent in the face of another human capacity, the ability to destroy, to annihilate the efforts of civilization. Thus the people of the western world, taken up with other matters and forgetful of their fragility, of the evil and sin they bear within them, stare aghast at the television images of the science-fiction realization of the evil intent of “others.” In effect, everything human is at grave risk, a risk that no missile defense shield can eliminate, not because of technical reasons, but because of the poison–Christians call it “original sin”–the envy that man carries within, against good and against himself.

It is difficult to fight those who are not afraid to die, those who even make death and self-destruction their absurd strategy for self-affirmation. We normally go to war to establish peace. But how can this be possible with those who are no longer persons, who, although alive, deliberately walk like dead men, having consumed the savor of existence and freedom in their total alienation to someone else’s plan? Someone like this, whether devoted to his god, or worse, to other men, does not exist; he is a nothing stuffed with explosives who reduces to nothing whatever he meets. Those who celebrate him share his destructive charge, which if it is not turned against himself, will be turned against others. How can we stop a degeneration that finds in violence, even in the violence suffered, the means of multiplying itself indefinitely?

The dismay and grief at what happened cannot be contained, much less resolved, either by the indifference that tends to reduce them to the emotion of watching a film, or by revenge that can only transform them into the bitter aftertaste of a devastating and merely temporary victory. We have to seek justice with all the means available to man, yet not according to the presumptuousness of man, but according to the will of God, of that God invoked by the Pope, followed by the multitude on their knees in prayer: “Even if the forces of darkness appear to prevail, those who believe in God know that evil and death do not have the final say. Strong in the faith that has guided our fathers, we turn to the God of Abraham, Isaac, and Jacob, the salvation of His people, and as trusting children we beseech Him to come to our aid in these days of mourning and innocent suffering.”

We must find ourselves once again, that is, find Him who has made us know goodness, the taste for life, for our own “I” as an indispensable factor in the world, to be communicated not only by the flickering of lights, but also by the testimony of devotion to the truth. It is a long, hard road, but probably the only way.