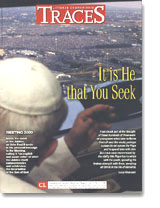 The following editorial is a commentary on World Youth Day and on the Meeting in Rimini by Giancarlo Cesana, which appeared in the Italian daily newspaper, Avvenire, on August 24th

After commenting extensively and exhaustively on the Jubilee of Youth, newspapers and TV honed in on our Meeting [for Friendship Among Peoples, in Rimini, Italy]. With two editorials in la Repubblica, Eugenio Scalfari warned against the presumed danger that the two million “good and pure” young people who were protagonists of the great encounter with the Pope could be manipulated like “wax”–in the hands of an unscrupulous minority (identified as CL and the Opus Dei)–at the orders of the pontiff, whom Scalfari nonetheless says he admires.

This is a fear that Scalfari can shake off right now. Our Movement and Meeting do not pose the problem of our attaining power over anything or anybody. We feel ourselves to be a part of the Jubilee event, as John Paul II himself wrote in his personal message to the Meeting, defining it as an “explicit and aware echo” of what the Jubilee recalls and celebrates: the incarnation of the Son of God. We are a part of that ethnic entity sui generis, to use Paul VI’s expression, of a people who look to the Christian proposal as the only satisfactory answer to the desire for freedom and truth that lies in every human heart–especially in the heart of youth, that period of life in which the search to fulfill fundamental needs has not yet had time to become resigned.
For over twenty years now, the Meeting has been a fact within the life of the Church that is, not of the one that some would like it to be, a docile courtier of those currently in power. We belong to the Church that, as the Pope testifies, has not renounced its appeal to reason and freedom, and thus reveals itself to be open to all the interests of life.

A faith reduced to a vague, aesthetically pleasing spiritualism without any impact on society would be vulnerable to the cultural hegemony of a few and the conformism urged by those in power.
Other representatives of the secular world, instead, participating in or observing the phenomenon of the Meeting, note a passion for reason and for freedom that they feel to be familiar and close to their most authentic inspirations.
Reason is not to be confused with opinions generated by and infused with prejudice. And freedom is not to be confused with the Pharisaical rhetoric of libertinism, which, extolling transgressiveness, ends up being integrated with those in power.

We are a movement that, precisely through the freedom of a charism, has swelled a life stream that came together with other charisms on the plain of Tor Vergata together with the Pope. That event brought everyone together in unity, exalting the differences of each, as St. Paul affirmed.
What strikes us about the Meeting, and all those who participate in it without preconceptions, is just this open humanity, of which the Church is the gathering place for all consciences, whatever the color of their skin and the ideas that they bring.