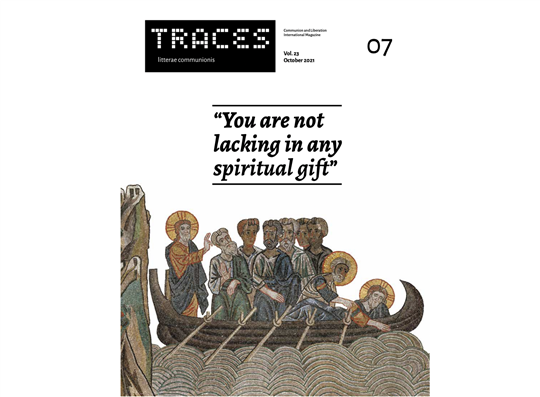 Those who saw the exhibit at the Meeting of Rimini on secularization, which we cover at the beginning of this issue, saw the images of churches transformed into restaurants, museums, or pools, and heard the Canadian philosopher Charles Taylor say that for him the most interesting question to ask is why he did not drift away from the church in the 1960s like so many others.
In the video, his question emerged backlit by quick shots of generations before ours displaying shards of authentic aspirations expressed in all sorts of ways that would flow into the tragic drive for an answer that we cannot give ourselves, even if there was no one who “hears” in these aspirations the presentiment of something more powerful than the buffeting winds.
Taylor’s question remains pertinent today. Julián Carrón proposed it again in the recent Beginning Day, which opens the journey of the Movement of CL for the next year, published soon at clonline.org: “How is it that we did not end up like so many of our peers who abandoned the church?”

Facing this question and not taking it for granted is the most evident fact in this moment. “If we do not belong to the desert, it is because of the grace we have received, the grace of the charism the Holy Spirit gave to Fr. Giussani, to serve the whole church”; that is, “because of the way Christ chose to draw us to Himself.” Faith breached an opening and penetrated into our lives only “because it answered our thirst for fullness and destiny,” continued Carrón, before introducing the audio of a 1976 talk in which Fr. Giussani said with all his being that “there is nothing more humanly revolutionary and true than this,” referring to the desire for Christ that beat throughout his life and left him breathless. “What would it profit a man if he were to gain the whole world and lose the meaning of himself in the process? What can a man offer in exchange for his very self ?”
The grace of life is an encounter with a voice like this, like that of Christ who speaks like no one else of the boundless value of the person. “If I spoke the word ‘I’ with a minimum of attentive tenderness,” said Giussani, we would see that nothing is comparable, nothing is as important and irreducible. “This ‘I’ is priceless.” In the midst of the noisy confusion of life and the ruins into which it may crumble, the possibility of a new self-awareness is born and reborn through the surprise of a unique gaze that you happen upon.
For this reason, we return to the Meeting of Rimini to look more deeply at some proposals that affected many people, to see them with the eyes of those who allow themselves to be struck, of those who were there for the first time or who concretely contributed, involving themselves by working on an exhibit or lining up the seats in an auditorium. There are people and facts that have a different weight than others that give rise to a concrete newness of life that exists because it is shaped by an encounter.