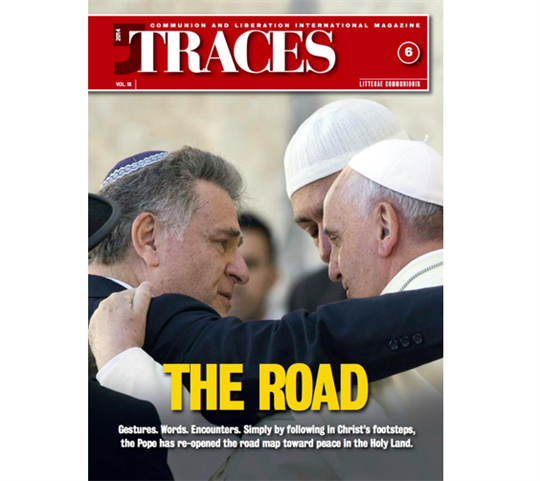 We were not expecting this. It was a pilgrimage, born for the most part as a way to mark the 50th anniversary of the historic meeting between Pope Paul VI and Patriarch Athenagoras and so therefore the theme would center on ecumenism and dialogue with our Orthodox brothers and sisters. That deeply meaningful re-embrace did take place, and we shall see its effects overtime,but much more happened during those three days Pope Francis spent in the Holy Land at the end of May.Words and gestures swept away all prognostications, displacing the criticisms of those who were waiting to measure every single adjective he used, those ready to criticize and exploit any possible sign that the Pope was favoring one side or the other.There was not a single complaint from the Israelis for that unplanned stop at the wall which separates Bethlehem from the world. There were no Palestinian protests for the prayer at the wailing wall or for the visit to the tomb of Theodor Herzl,father of Zionism.

It is surprise–continually manifested–in front of those reminders of what is essential.“Before the mystery of God we are all poor.”Or:“It is a bond whose origins are from on high, one which transcends our own plans and projects, and one which remains intact despite all the difficulties which,sadly,have marked our relationship in the past.”It is a surprise that has become wonder in front of an invitation:“Come to my house to pray for peace.” Shimon Peres and Abu Mazen did go there on June, 8th. “It will be prayer only, nothing else,” Francis had indicated.In fact,there were no talks, no mediations–in short, no politics. But it is difficult to imagine that such a gesture would not create an opening.As it is, “it’s hard to argue that Pope Francis is not the world’s best politician,” wrote Time magazine.

Naturally, it’s the Pope.He is inevitably on the international stage. Whatever he says or does is observed and analyzed under a microscope.But the more we look at him,the more a question arises:what enables him to be so incisive? What moves him,what is his concern? And why is it that without “playing politics” he is giving history such a powerful jolt? The answer is in his gestures and in his texts which must be read slowly,perhaps starting with the text that does not come from his pilgrimage to the Holy Land;it is a speech given to the Italian Bishops shortly before his trip.It is striking to see that he starts from a question that could easily be taken for granted among cardinals and prelates, and which instead should never be taken for granted–not even by the Pope: “Who is Jesus Christ for me? How has he marked the truth of my story? What does my life say of Him?” Everything starts from here,from this awareness of Christ and of oneself, and from the witness that springs forth from it(“What does my history say of Him?”).Gazing at this man,observing him in front of the Wall or on the banks of the river Jordan, kneeling in front of the Holy Sepulcher or as he embraces his brothers and sisters of every faith–you can see it. Only this moves him, nothing else: Not strategies,nor schemes.

Looking at him,we can understand a little more of what awaits us,of our task,of the work to be done,“day by day,like artisans.” It seems insignificant compared to great and complex issues like Europe, the financial crisis, or war. It requires time and patience.That is why we often seek other routes:shortcuts to get quick results and crumbs of power that allow us to be“more concrete.”However, as the Pope reminded us at the Esplanade of theMosques,there is only one road. It is a journey that is“docile to the call of God”and“open to the future that he wishes to create for us.”It is like“the pilgrimage of Abraham,”one who was not preoccupied with changing history, but did just that.