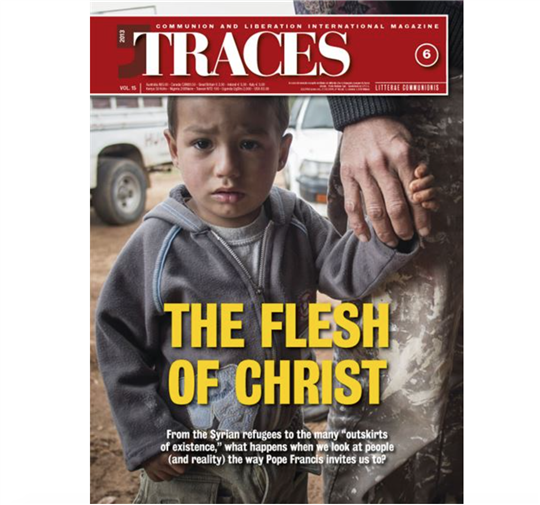 “We cannot become starched Christians, those over-educated Christians who speak of theological matters as they calmly sip their tea. No! We must become courageous Christians and go in search of the people who are the very flesh of Christ, those who are the flesh of Christ!” Pope Francis’ words toward the end of Saturday evening (May 18th, Pentecost Vigil in Saint Peter’s Square with the movements) did not draw immediate applause, unlike many other things he said earlier. This was truly a sign that the crowd was shaken, almost a bit stunned. Then, after his two questions about almsgiving–“When you give alms, do you look the person in the eye? Do you touch the hand of the person you are giving them to or do you toss the coin at him or her?”–he said, “This is the problem: the flesh of Christ, touching the flesh of Christ.”

The richness of what the Pope told us in those two days deserves to be considered with deep reflection. You will find all of his words in the center of this issue, but that particular sentence made our hearts leap, even though we might be tempted to reduce it a moment later, intellectually (“Well, yes, he was talking about the poor, but as an example...”) or moralistically (“But I just can’t manage to do it...”), as a way of avoiding its impact. We are masters at this. But the Pope knows this, and does not leave us a way out. “Poverty for us Christians is not a sociological, philosophical, or cultural category, no. It is theological. I might say this is the first category, because our God, the Son of God, abased Himself; He made Himself poor to walk along the road with us. This is our poverty: the poverty of the flesh of Christ, the poverty that brought the Son of God to us through His Incarnation.”
This issue of Traces includes the booklet of the Spiritual Exercises of the Fraternity of Communion and Liberation. Many of our readers are working on it during these weeks. Who knows how many of them, hearing the Pope, recalled that focal passage on the “bewilderment” that overwhelms us when we are faced with the problems of living, when “the adult avoids the toil of making faith incarnate in life, and avoids letting faith disconcert him”? The Pope speaks of the flesh of Christ, the Incarnation, that God “who made Himself poor to walk along the road with us.” He is the one who enables us to not stop at the surface of things, at appearances, remaining inexorably bewildered, but instead to go to the heart of reality, to the fabric of which our humanity and the whole universe are made: the Mystery, the reality of reality.

Looking at the world this way, as the Pope looks at it–looking at the person this way, beginning with the one who reveals his need the most, beginning with the poor–is another thing. It is the true gain of faith. It gives a new vibrancy, a new certainty, and, above all, a new consciousness. It enables us to begin to treat others according to what they are: an infinite mystery.
Here, in this issue of Traces, together with the summary of the two days in Saint Peter’s Square, you will find an attempt–very limited, granted–to look at what we have around us this way, beginning with the Syrian refugees, who might be viewed as a problem, a number, a political question, but who, instead, are first of all men and women who are suffering: the flesh of Christ. This is also true for those who have lost their jobs, who are sick, who are swept away even before being born... people like me and you.