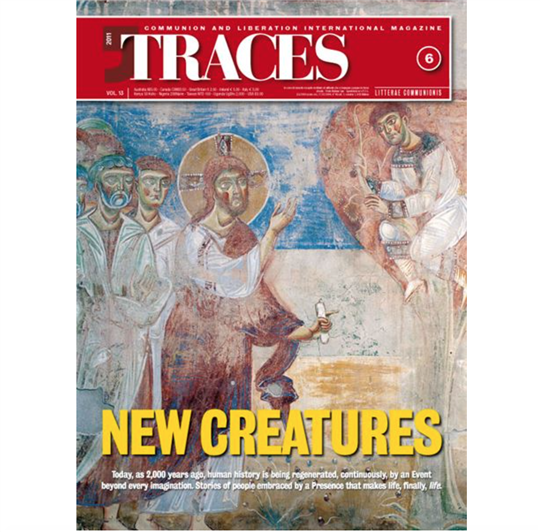 "Sometimes we have to ask ourselves what it means to have an impact on history. What moves the human person deep within?" Julián Carrón, CL responsible, posed this question–this challenge–at a recent public gathering. The first way to fail to take it seriously is to think that it is a question tailor-made for certain moments, when you're tempted to calculate your own "weight," your ability to move and change the world around you. If you win, you have an impact. If you lose, you don't count at all.
It's a terrible reduction, first of all because no position, no power, can fulfill the human person's desire. Also, it only considers the first part of the question, as if history were something different from the "I," as if it were separate.
It is a subtle dualism that insinuates itself almost without our realizing it, and translates into a doubt: can what touched me also truly move what I have around me? Can the Christian experience that is changing my life truly interest everyone? Can it truly have an impact on everything? At that meeting, Carrón articulated this doubt with these words: "Did Christ, desiring to have an impact on history, make a mistake when He created the Church instead of a political party? If we think so, we will always think that it's better to do something else, that we will have more of an impact by doing something else."

The point is that this question can only be answered from within an experience, or, in other words, looking at the facts and judging them, becoming aware of their importance. In doing so, the dualism is defeated, because you realize that the true victory is the exaltation of the "I," its liberation.
But this can happen only in history–not outside it–within circumstances. It is there, engaged with reality, that we realize how people changed deep inside by Christianity can also move what surrounds them, even deep down, and this way, a bit at a time, have an impact in history, in times and ways that we do not decide, because it is up to the Mystery.

So then, let's try to read the facts recounted in this issue in light of this question. Let's try to ask ourselves in front of these facts whether faith has an impact or not on man's life–deep within–to the point of changing him, and building a different history where you would least expect it, as in a maximum security prison.
Perhaps we will begin to understand more the "repercussion in the heart" that Fr. Giussani felt in 1969 when one of his students at Catholic University of Milan told him, "If we don't find the forces that make history, we're lost." He himself, years later, described that repercussion: "The forces that move history are the same that make man happy." And "the force that makes history is a man who made His home among us: Christ." Acknowledging this "introduces our life to the accent of happiness. It is in the deeper pursuit of these things that you begin to... look in the mirror and sense that your face is more substantial, your 'I' is more substantial, and your journey among people is more substantial; it doesn't depend on the gazes of others, but is free; it doesn't depend on the reactions of others, but is free; it is not a victim of the logic of the power of others, but is free." Ubi fides, ibi libertas–deep within, and in history.