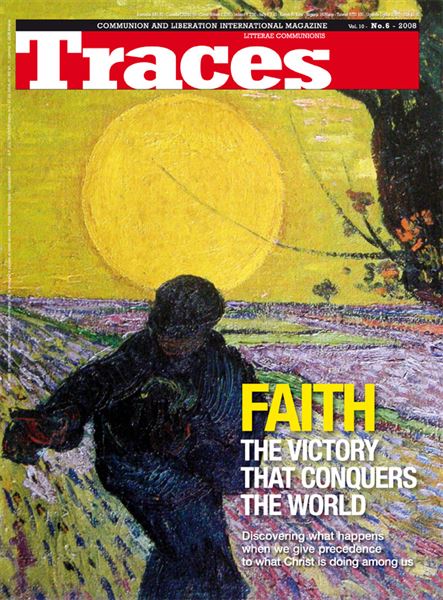 “What happened in Rimini?” It’s a question we have heard many people ask, after the two sessions of the CL Spiritual Exercises in Rimini, Italy–first, for the Fraternity, then, two weeks later, for the Workers. That question was circulating insistently among friends and colleagues, husbands and wives, asked not only by those who were not there but also–and this is the best part–by those who were there, and were so taken aback by the immensity of what they saw and heard that they went on asking themselves, “What happened? What is happening now in our lives?”

It is not a banal question. It is the first step for anyone who wants to take seriously what is before him, and not file it away in an album of happy memories that are sterile and powerless because they are unable to become a judgment and lead to a journey of knowledge.
What is actually happening for many is the discovery of a more human way of entering into reality, of the only human way of entering into reality profoundly. The point of departure is the one referred to resolutely everywhere, in Rimini just as in Milan, where five thousand teachers gathered in a meeting with Fr. Carrón were presented with the example of a student, Elisa, a classmate of one of the boys arrested for killing a fellow student in Verona, who wrote a leaflet with a clear judgment on the affair. “From where did this girl start off? We have to look at what is happening before our eyes. And what is happening? Let’s try to put ourselves in her shoes. What set her moving? What was her point of departure, the origin that made her challenge everything, and stand out in front of everyone with this judgment? It is not a particular intelligence, nor an ‘adult’ knowledge, nor a particular energy; it is simply the capacity to adhere to Something that comes first.”

We need “to look at what is happening” and “to adhere to Something that comes first,” because “we want nothing other than to follow what He is doing amongst us.” This is the method. It is a simple one and therefore within the reach of the simplest, and it is a very powerful one, capable of overturning in a flash the idea we often have in mind that Christianity is an event, yes, but of our making, entrusted to our capacity to reproduce it, to create the conditions favorable to its happening–in a word, to organize it, “as if we were the creators of what we claim to believe in,” as we heard during the Exercises.
The One who makes Christianity is Christ. Without Him, we can do nothing. Our task is the finest one: to follow, to give room to His work, and to enjoy that unimaginable correspondence that we see blossoming in our lives and that, little by little, we learn to call by its true name: freedom.