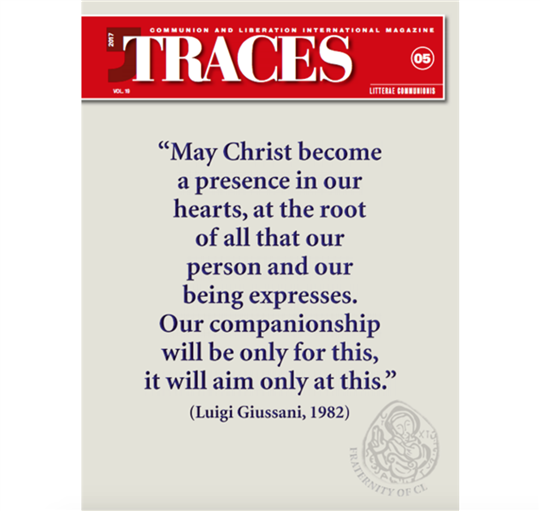 It has just arrived in bookstores in Italy, with the curious title Una strana compagnia [A Strange Companionship], and a heading that identifies it the first volume in a series with a similarly unusual name: “Christianity Put to the Test.” It is the collection of lessons and dialogues offered by Fr. Luigi Giussani at the Spiritual Exercises of the Fraternity of Communion and Liberation from 1982–the year the Fraternity received pontifical recognition–to 1984, with meditations, assemblies, and homilies, steps that recount first-hand the beginning of a reality that today involves tens of thousands of people throughout the world. At first glance, it would seem that nothing could be more for “insiders,” intended above all for those who live the experience of CL (especially since the Fraternity is the point in which this experience tends to be the deepest, and acquires in some way a definitive expression: it is “the work of the Movement,” as Fr. Giussani said). But just thumb through a few pages and you will understand that this is not the case. It sets forth a proposal for everyone, because it speaks of something profoundly human.

The heart of these pages is faith, or better, “The impact of faith in the life of the human person, its usefulness for facing the daily toil of living,” as Fr. Julián Carrón, Fr. Giussani’s heir, writes in the introduction. Does Christianity have anything to do with our real needs? “Put to the test,” does it offer a true, effective contribution? The Fraternity is a wager on the continually verifiable “yes,” step by step. It offers everyone a Christian experience–a method, a place, and a road–as concrete help for life, something that helps us face work, problems with our children, and a clamorous social situation, as you will see in the stories that we tell in the Close-Up, but not simply resulting from solidarity, from getting together to give each other a hand (which is something rare and precious, especially today), but because it helps the “I.”

On this point, the clarity of the book is striking. The goal of the Fraternity of Communion and Liberation is not first of all to build things, to organize ourselves socially, “to do.” It is to help the person to grow in faith. It is to generate people who are mature in their awareness of being–before anything else–in relationship with God, because this is what changes life. “The Lord presses so that through us, a new personality may enter into the world: He has to break down the door. People who finally recognize that their nature is of belonging to an Other are people who are always positive [...] because they are free; they are always inclusive, embrace everyone, understand everything, and, I was about to say, smile at everyone,” wrote Fr. Giussani. What task is entrusted to such people? “Bowl over the world, invade the world, so that Christ may have His testimony: in fact, the world exists that it may know Christ.” Here then, is the horizon of this “strange companionship.” It exists only so that people may be themselves, so that they can know Christ ever more deeply and, by living, make Him known to their fellow human beings. Education to faith and testimony, together. The two things coincide.

In these days–perhaps you may have already seen–there are also big changes in the way CL makes itself known to everyone. There is a new website (only in Italian at the moment, but it will be soon made available in other languages), completely overhauled for two fundamental reasons: to present more effectively the educative itinerary of the Movement, and to make even more welcoming the invitation to get to know it, to “come and see” what it is about. It is “an ironic attempt,” as Fr. Giussani would have defined it, imperfect, full of limitations, but here, too, the goal is to explore more deeply the beauty of faith, and share it with everyone, so that it may help them live.