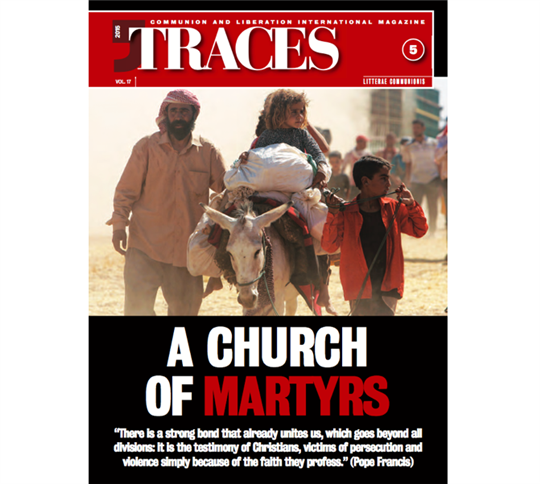 Those words made a lasting impression on us. Months later, they are still fresh in our minds and our hearts. It was last summer, shortly after the invasion of Mosul and the expulsion of Christians, with ISIS on the march all over the area. The opening talk of the Meeting was dedicated to the Middle East, and the guest of honor was Fr. Pierbattista Pizzaballa, Custodian of the Holy Land. With just a few sentences, he had opened up a new perspective. To understand what’s been happening, he said, what we need is not political analysis but “a religious gaze: broad, raised to the heavens, free from fear and other complexes,” the gaze of someone who “doesn’t just trust in his own forces, but who entrusts himself, who puts his life in the hands of Another.” In a word, “a redeemed gaze.”

Nine months later, the situation is even more dire: in the Middle East seized by jihadis; in Nigeria wounded by Boko Haram; in Kenya plagued by Somali al Shabaab; in Pakistan tormented by blasphemy laws; and in many other places around the world, persecution of Christians is on the rise. The Church, as Pope Francis often reminds us, is increasingly a “Church of martyrs,” of men and women who are “victims of violence and persecution for the sole reason of being Christians.” Together with and within the initiatives being undertaken at all levels to stem the tide of suffering and to defend the fundamental rights of Christians and other minorities who are being persecuted, Fr. Pizzaballa’s judgment on the situation is even more striking; it becomes even more urgent. A redeemed gaze is needed, but what can generate it? Where does it come from?

At the end of April, the Spiritual Exercises of the Fraternity of Communion and Liberation were held in Italy, with other European countries connected by video. They will soon take place in the U.S. and other countries around the world. The Exercises opened with this reminder: “We are still immersed in the light of the night of Easter,” that “light that the risen Jesus definitively brought into history. This is the light with which the Church looks at everything, because it’s only with the definitive appearance of the light of Jesus’s Resurrection that we can comprehend that which we would not understand without it: the ultimate meaning of life. [...] In the light of the Resurrection, we can face humanity’s most pressing question: Is life really worth being born?” This is how we can judge history in all of its twists and turns, even the most painful ones. It is the light of the Resurrection, the presence of Christ now and in every moment in history that redeems one’s gaze. It frees our vision so that we can see everything with a perspective and a depth that, on our own, we as humans do not have. In the Christians being persecuted, we find it again and again. Just read the witnesses of Fr. Douglas, of the refugees in Erbil, and the students in Kenya. All of which you will find in the following pages. Or the thousands of others expressed from the hearts of the “Church of martyrs.” There’s pain, blood, and suffering, but death is not victorious.

This is the gaze that we want to learn and these are the men and women that we want to defend, in every way possible. We ask the world not to be indifferent to them, as the Pope has said. Let’s get involved, to the extent that we are able, in helping them. Let’s pray for them, as we will do at the Vigil of the Feast of Pentecost throughout the world. The statement from the Italian Episcopal Conference (CEI) announcing the vigil described it as “an important gesture of prayer to God and of closeness with our brothers and sisters.” Brothers and sisters who, because of this redeemed gaze, can “witness love at the cost of their lives.” They are witnesses whose sacrifice “cannot continue shrouded in silence, because it is a source of encouragement for all of us to pursue good and resist evil.” Their witness brings a light into the world: the light of the Resurrection.