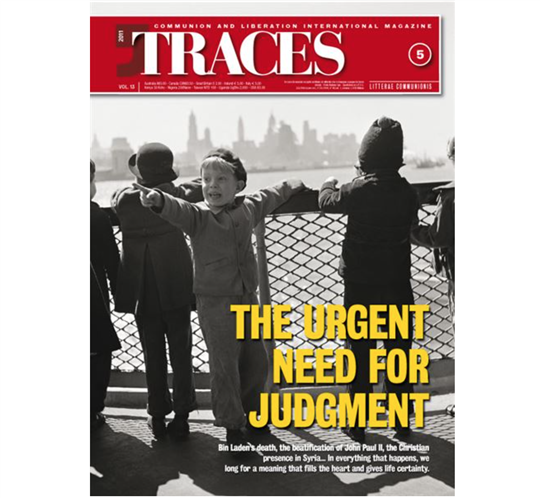 Three days, just like those that marked the culmination of Holy Week the preceding weekend…. Arrival in Rimini on Friday, return to Rome on Sunday, first for the Spiritual Exercises of the Fraternity of CL and then the Beatification of John Paul II. They were predicted to be intense days. They were intense, but much more than we had imagined. Whoever was there, witnessed it; whoever was there, saw that those two gestures linked together by one sleepless night were a single fact, a great fact, something destined to endure in memory. But what is the nature of such unity? What words could we use to express it?
In the booklet that comes with next issue of Traces and on our website, you will find the text of those Exercises. Toward the end, you will come across an ancient expression, one used by St. Ambrose: "Ubi fides, ibi libertas." "Where there is faith, there is freedom." It is the last leg, almost the arrival point, of the path taken in Rimini. But it is also "the formula that sums up what we are pursuing most recently," Julián Carrón recently said, speaking to a group of Movement leaders. The motive is simple: "The reawakening of the self is made evident in libertas. Freedom is the proof of faith." The capacity to stay within the real, within daily life, amongst the conditions and limits imposed by reality, yet being free, not determined by all the other things, is "only the fruit of faith." In The Religious Sense, Fr. Giussani sketched out a drawing with a circle, that represents the world, and with a dot that is you inside the circle. If you are not in relationship with the Mystery, the "X" that lies outside the circle and does not belong to it, then you are left to the whim of circumstances. The circle bounces and you bounce with it. But the relationship with that "X" is different; it gives you stability, a consistency that no oscillation can throw into crisis.

Ironclad logic, difficult object. Yet the beauty is not found in the idea, so simple and so effective. And it is not even in the linear explanation found in those pages. The beauty is that freedom, as described there, can only happen. Precisely because that dynamism is true, it can only happen. The formula is not enough to free us. "What is necessary is a faith in the sense that Fr. Giussani says, that faith be an experience present, confirmed in experience itself," Carrón added in that dialogue. "Otherwise, we dream of freedom, and so it is not possible to generate a subject like John Paul II: the saint who fully realizes humanity."
What we need is that "X" here and now. That ubi, that "where"–a place, a point in time and space–is fundamental. It is the sole possibility for overcoming the ideology we otherwise inevitably follow, not out of wickedness, but because it is inevitable. "In this sense, it is the least moralistic thing there is," Carrón again observed. "Ubi fides, ibi libertas. Moralism is not the problem–faith is. The problem is not moral perseverance, but faith, and the question of whether we are willing to take the path of the faith that permits this surprise called freedom, which is the flower that is the least taken for granted, since it is impossible to man."

Ubi fides, ibi libertas. In the days in which the total harmony, almost affinity, between the experience of the Movement of Communion and Liberation, the Magisterium of Benedict XVI, and the masterful witness of John Paul II flowered in all its evidence, it is striking to remember that, six years ago, just before he succeeded Pope Wojtyla, the then-Cardinal Joseph Ratzinger quoted Ambrose's expression in a homily. This is how he explained it: "Freedom, in order to be true, and therefore also to be effective, needs communion. And not just any communion, but ultimately the communion with truth itself, with love itself: with Christ." It was the homily for the funeral of Fr. Giussani. But it is true now.