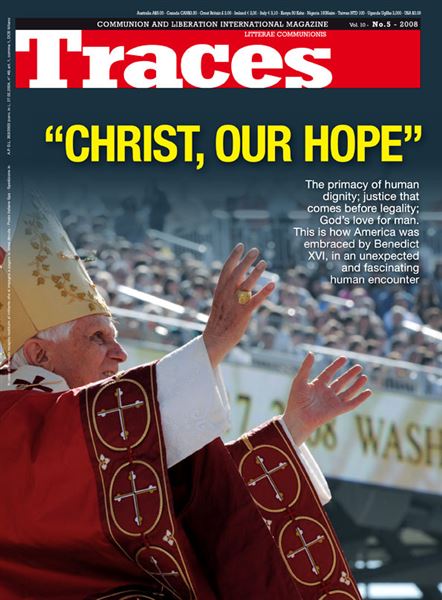 What does it mean “to say You to Christ?” This was one of the most-circulated questions in the halls of the Rimini Trade Fair Complex, among the twenty-six thousand people Fr. Carrón had just accompanied on retreat in the discovery of “the victory that conquers the world: our faith.”
Twenty-six thousand, plus others participating by satellite in 62 countries for the Fraternity Spiritual Exercises… All have been deeply affected by the power with which the Mystery works through us, as seen in the film documenting the event from São Paolo, with Cleuza and Marcos Zerbini and the fifty thousand Landless Workers members who have entrusted themselves to CL. All have been fascinated by the journey that leads reason to get to the bottom of things, to be able to say, “Only You have the words that explain life,” that enables us to acknowledge the Mystery present and thus to truly know reality and ourselves. All have been surprised by the prospect that hope isn’t placed in the companionship charged with humanity even as it embraces us every day, but in that precise face, with its own physiognomy that is “ultimately original, of unique lineaments.” And all have been moved by that image quoted by Fr. Giussani, the piece of simple butcher paper hung over a desk in a Memores Domini house, with just one word dominating space and time: You.

This is why, among the many questions, the one that came to the surface so often was, “What does it mean ‘to say You to Christ?’”
A simple question, almost disarming, and yet charged with fascination.
It reveals all our weaknesses, the dualism, the obstinacy with which we continue to think of Christ as something alongside reality, for whom we have to imagine a face and form (would it ever cross our minds to ask, “How can I say ‘you’ to my wife or my children?”).
But this question also expresses our strength, the discovery of a new prospect, of a possibility for familiarity with the Mystery that rests everything on His initiative, on the impassioned tenacity with which He enters our life and makes Himself our companion, our contemporary; on the patient smile with which He waits for our smile to break out in response, for our acknowledgment to flower, and, with Him, our humanity; on grace: “A flower of grace that flowers on the extreme limit of the dynamic of reason and to which man adheres with his freedom.” This is faith, as Fr. Carrón described it at a certain point, drawing once again from Fr. Giussani.

Certainly, in order for that flower to grow, a work is required: School of Community and the booklet of the Fraternity Exercises transcripts, which you will find enclosed with the next issue of Traces, as well as the whole long series of aids and instruments that marks our daily walk. This, too, is grace, and not just so to speak. Something exists, is given to you, and continually provokes your freedom. There’s nothing to be imagined; it’s just a matter of following, and, beginning in this way, simply to say “You.”