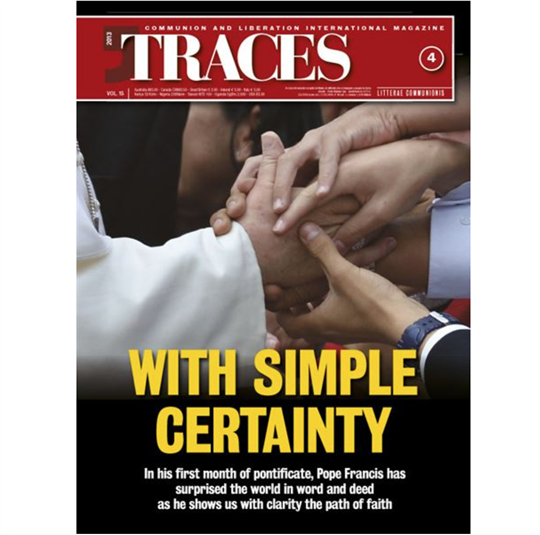 First of all, there is what happens, the words and gestures–that are worth more than a thousand hypotheses on the Church that will be or that should be–and that show Christianity for what it is: a surprising event, which cannot be reduced to our interpretations.
More than a month after his election, Pope Francis has shown many such words and gestures, such as bowing to receive “your prayer for me,” as soon as he went out onto the Loggia of the Blessings. Then there was the sight of him going “as a pilgrim” to the Basilica of Saint Mary Major, flowers in hand for Our Lady, and his strolls outside the Vatican walls, his greetings to the faithful, one by one, at the end of Mass at Sant’ Anna, the telephone call to the faithful of “his” Buenos Aires gathered in Plazo de Mayo, and his exchange of the throne for a simple chair, and the gold fisherman’s ring for a silver one. And there have been words, important ones, beginning with his first, in which he spoke of himself simply as “Bishop of Rome,” the Church that “presides in charity over all the Churches.” Not everyone noticed, but in that quotation from Ignatius of Antioch there was the seed of newness regarding the very ministry of Peter. It was not by chance that also Bartholomew, Patriarch of Constantinople, was present at the Mass of installation. The attendance of the Patriarch hadn’t happened since the Schism of 1054. Equally unusual, and of great value for Christian unity, was his prayer at the tomb of Saint Peter, together with the Patriarchs of the Eastern Churches, right before the Mass, as was the Gospel proclaimed in Greek.

These are much more than simple disregard for ceremony dictated by temperament. They have to do with the idea of the papacy. We will discover their value only in the coming months or years, just as time will be needed to understand the importance of many other things that have struck us in Pope Bergoglio, such as the absolute simplicity of his features, his continual use of words like “protection” and “tenderness,” and his insistence on the Church being “poor and for the poor” and on the power that consists entirely in serving.
In many cases, there have been attempts to block the surprise, to bring everything back to more familiar categories (sentiment, the “good Pope,” or politics, the “revolutionary Pope”), taking for granted the way the Pope always leads everything back to the origin: Christ.
Instead, it is evident that this is the center, that Francis’ first gestures echo Benedict XVI’s last ones, with those words said in the same way by both men: “The Church is Christ’s, not the Pope’s.”
Among the most important events in this first month of pontificate there is certainly the encounter at Castel Gandolfo between the “two brothers,” as Bergoglio himself said. The true friendship between these men was visible, something radical that far exceeded customs and roles, and also the common accent of humility, so evident in both men. There was the total unity that is born of faith, of the acknowledgment that everything comes from Christ, and that with Him “the heart never ages,” as the Pope said in his Palm Sunday homily.
The way this Pope is showing this, pruning back everything to point to Christ, will be one of the foundational features of the coming years. We will learn to know him, looking at what happens: words and gestures.