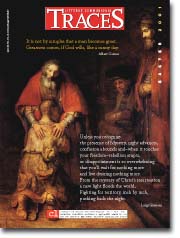 St. Ambrose’s hymn for Easter says that from that day on, the only one to die is death. This text reminds us of how the thief stole at the end, he grabbed eternal life at the last instant, and through a wondrous mystery, the flesh of One saved the flesh of all. Thus emptied of all its power, “let death be sorry that he alone has died.”

Easter is a great revolution because it establishes the overturning of the order of power. Death, which ostensibly prevails over human experience and thought, has been overcome along with every limitation that points to its reign. Power is restored to the authentic Factor of life and His mysterious plan.

No political revolution, no changing customs, no state of health, and no milestone of progress achieved can give to the hope of every individual, caught up in the tangle of his existence, the same reasonable support as the one he receives from the event of Easter. This is the point on which rests all the thrust for knowledge, construction, and sharing which man feels rising up inside him.

From Easter, passion for reality is reborn, because reality is full of infinite and immortal value, every hair on our heads, every bird in the sky, and every person as he is, however he is. A man who has lost his consciousness of the event of Easter tends to reduce his life to a precarious truce with what opposes him. He is no longer a man who throws himself into constructing new forms of life, but a creature shriveled up inside the calculation of what works most in his favor, into making a deal with the morality imposed by his times and with the ideas stuck in his head by the masters of the moment. He no longer has any “motive” (motus) to love reality and to take seriously the desires of his heart.

God gave men power so that they might collaborate in His creation through their involvement within the range of their own talents, their families, and society, all the way to that “demanding form of charity”–in Paul VI’s words–which is politics. Easter clarifies the true purpose of man’s power: not to be used for death, but so that the infinite destiny of each and every one may be fulfilled, even of the thief.

Every question of power, including political battles, throws into light the question of what pushes a man to commit himself, to become passionate about reality.

In the history and life of each person, many are the times when involvement in reality happens according to a dark outlook that limits the dignity of the person, his concrete freedom, and that would like to reduce society to a standardization and to a quiet worthy of a graveyard, perhaps with the pretext of acting in the name of the law.

The event of Easter is not a religious fable: it is the fact that established in the world a new humanity whose faith “conquers death” and from which we take even today the motives and criteria for involvement in the reality that has been given us to live, in all its factors.