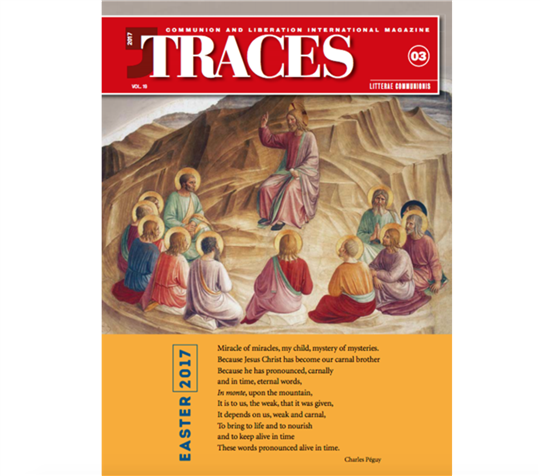 This month’s editorial is a letter written by Julián Carrón, President of the Fraternity of Communion and Liberation, for the upcoming visit to Milan of Pope Francis. The text was published in the Italian daily Corriere della Sera, on March 1, 2017.

Dear Editor: as I think about Pope Francis’s trip to Milan, a page from a book that’s very dear to me, and that readers of the Corriere know well, comes to mind. I think it describes how many of us feel these weeks leading up to his arrival: full of curiosity and anticipation. “As the light grew steadily brighter, he could make out crowds of people moving along the road at the bottom of the valley, some emerging from the houses, but others coming from farther afield. They were all flocking in the same direction, to the right of the castle, towards the exit of the valley. They were all wearing their Sunday clothes and walking very briskly. ‘What the devil’s up with them all?’ [...] The Unnamed stayed where he was, with elbows on the window-sill, intent on the procession below. There were men, women and children, in groups, in pairs, and singly. One man would catch up with someone walking ahead, and would fall into step alongside him. Another would come out of his house and pair off with the first passer-by he saw; they would go on together like friends setting out on a pre-arranged journey. Their movements clearly showed a common haste and a common happiness. [...] He stared and stared, his heart filled with a growing curiosity, and something more than mere curiosity, to know what it was that could give the same powerful happiness to so many different people. Soon afterwards, the bravo came back to report. The day before, Cardinal Federigo Borromeo, the Archbishop of Milan, had arrived. [...] When the master of the castle was left alone again, he continued to stare down into the valley, more gloomily than ever. ‘So it’s all on account of one man!’ he thought. ‘They’re all hurrying happily off to see just one man. And yet every one of those fellows down there must have his own devil to torture him. But none of them has a devil like mine; none of them has just passed a night like I have. What is it about that man which makes them all so happy? [...] If he knew the word of consolation for me, now! And why shouldn’t I go too? Why shouldn’t I?... I’ll go, and I’ll talk to him” (A. Manzoni, The Betrothed).

We too are tortured by preoccupations. But it’s precisely the awareness of our boundless need that can make us attentive to the smallest signs announcing the possibility of an answer. We too, like the Unnamed, may be amazed that it’s a man, a single man, who is the key to resolving our preoccupations. For me, the Pope’s arrival in Milan is the opening of this possibility once again. And with the Unnamed, I say to myself, “I will go,” to meet the person who has words “of consolation,” who can reawaken my hope. My hope is that all of those who will go to see the Pope might relive this startling experience of encounter that Manzoni describes: “As soon as the Unnamed entered the room, Federigo went to meet him with a calm and friendly expression, and arms outstretched, as if to a welcome guest. [...] The Unnamed [...] raised his eyes to that man’s face [and] felt himself more and more penetrated by powerful yet gentle feelings of veneration [...]. Federigo [...] stretched out his hand to take that of the Unnamed. ‘No, no!’ cried the nobleman. ‘Keep away from me–do not soil that innocent and virtuous hand. You do not know all that this hand of mine has done!’ But the Cardinal seized it with loving violence, saying: ‘Do not prevent me from clasping that hand which is to right so many wrongs, which will perform such widespread good works, which will raise up so many of the afflicted, which will offer itself, unarmed, to so many enemies in peace and humility.’ [...] The Unnamed freed himself from that embrace [...] saying, ‘O truly great and truly merciful God! Now I know myself, now I understand what I am! My iniquities stand in front of my eyes, and I am revolted by myself–and yet... and yet I feel a comfort, a joy... yes, yes, a joy such as I have never known during all this repugnant life of mine!’” (A. Manzoni, The Betrothed).

Who wouldn’t want to receive this kind of embrace from Pope Francis? That embrace that we saw repeated throughout the Year of Mercy, and that will come in the flesh to our Ambrosian diocese in just a few weeks? As Cardinal Scola noted: “Meeting the Pope in person–even if it’s in a crowd–receiving this gift [...] is a life-changing experience” (February 11, 2017). I hope that our amazement at the Pope’s charity toward us will push us to desire to be like him; that we can experience the power of mercy for ourselves and for society, a mercy that converts us–wherever we are–into hands that right many wrongs, perform good works, raise up the afflicted, and offer themselves unarmed in peace and humility, even to enemies. Fr. Giussani, a son of this diocese, once said, “Each of us, seized by this great Presence, is called to be a re-builder of destroyed houses. [...] Each of us is, every day–if only he adheres to it with sincerity–the goodness of Jesus, His will for the good of man who lives in these sad and dark times.” This is the origin of “the spectacle: portions of a people, of a society that is different, defined by a new climate [...] in which mutual esteem becomes possible” (L’Osservatore Romano, February 11, 1997). And we all know how much need there is to receive a gaze full of affection to be able to face the incessant, daily challenges of life without fear.