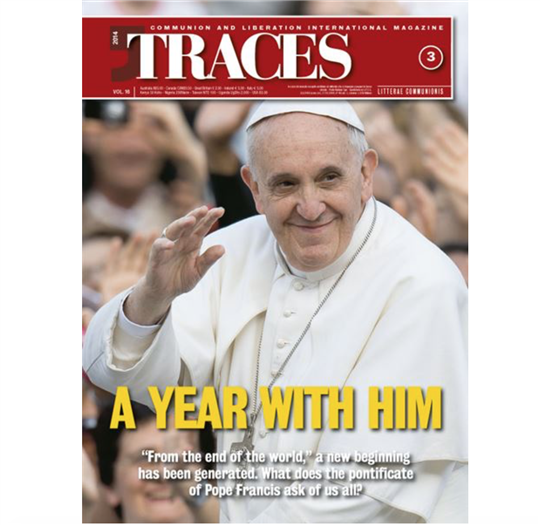 We would never have imagined it, a year ago–not like this. But the tremor, which was triggered by Pope Benedict XVI’s great and prophetic gesture, and which then exploded with the advent of Pope Francis, is truly shaking the Church, down to the heart of each believer. Ever since Francis’ appearance on the loggia of St. Peter’s, his pontificate has been a series of gestures and words so surprising that they continually spark a question: What is the Pope pointing us toward? What is he asking us to change? What sort of conversion is he suggesting to our–to my–heart?
The beauty of a question like this is that it cannot be definitively answered, once and for all. And not just because of the wealth of the content that the Pontiff offers (you will find many launching points just by skimming the cover story of this Traces), but precisely because of the nature of the question that he poses. The Pope tells us many things, which should be examined word by word. But always, in all of them, he invites us to one thing: to deepen the personal relationship with Christ, the bond with Him, with His companionship. “I invite all Christians, everywhere, at this very moment, to a renewed personal encounter with Jesus Christ, or at least an openness to letting Him encounter them; I ask all of you to do this unfailingly each day,” he writes in Evangelii Gaudium. “No one should think that this invitation is not meant for him or her, since ‘no one is excluded from the joy brought by the Lord’ [Paul VI, Gaudete in Domino, May 1975].” It is a personal call to a life, to a living relationship. Everything comes from there; everything orients itself based on that. And one does not “define” a relationship–first of all, he lives it. Without this “personalization of faith,” as Fr. Julián Carrón recalled in a recent encounter with some CL leaders (see Page One, this issue), without the bond with Christ becoming a real and personal experience for each of us, we will never be able to verify if faith truly is “useful to us for living.” That is, if it causes man and his awareness–of himself and of reality–to grow. In short, if it generates people.

The person seems like nothing, in a world where the squares are burning, as in Kiev or Caracas; where war lights fires everywhere, from Syria to central Africa; and where the economic crisis has been wearing people and institutions down for some time. What does faith bring to this world? What newness is introduced by a person who lives an encounter with Jesus?

In these pages, you will find some clues–starting precisely from Independence Square in Kiev, where, in the drama of the revolution and the regime change, the snipers and the deaths, facts emerge that reveal a newness. Among these is the priest who guides a line of Berkut (policemen captured by the crowd) by hand, bringing them to safety between the lines of protestors: enemies against enemies, in the midst of guerrilla warfare–not “before” or “after,” as things settle down–and yet capable of treating each other like men, thanks to that presence. One can think whatever one wants about the Ukraine, reason about geopolitics, and imagine future scenarios, but it is difficult to deny that that priest is already changing history, is already rebuilding a human fabric.
It is also difficult not to be surprised by the story of family crisis and redemption found further into this issue, a story that speaks more about what a marriage can be than many theories. Or by the gaze that introduces itself at a certain point in one of the protagonists of the struggle (victorious, at least for now) against euthanasia in Canada, which halts the logic of confrontation in its tracks. Or by the witnesses that you will read in the letters. Men and women: they seem like nothing, but they make history.