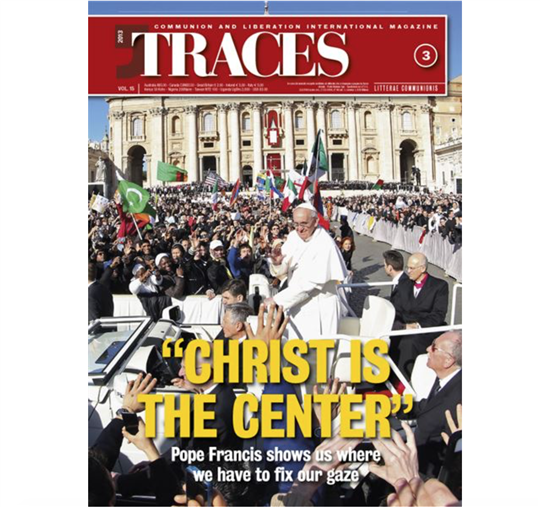 This issue's editorial is the article by Julián Carrón, President of the Fraternity of Communion and Liberation, published by the Italian daily Avvenire on March 16, 2013.

It's common knowledge in the information age that news wears out; it cannot keep our attention for more than a certain amount of time. The imposing gesture of Benedict XVI's renunciation already seems to have consumed most of that attention, centered on the heart of the mystery of Christ and His Church. However, immediately after we saw Ratzinger disappear with a smile, the media attention turned to Rome and the Cardinal electors. It's difficult to avoid the question of what lies behind the figure of Peter's successor, which generates an attention and an attraction that go beyond the normal duration of media events.

During the almost two weeks of the vacant see, many hypotheses were explicitly or implicitly offered about the nature of the phenomenon called Catholic Church. They were days in which we relived the question that Jesus Himself addressed to His Apostles: "Who do people say that I am?" And people tried to respond today, too, almost urgently, as if it were a phenomenon that demanded an explanation. They responded by applying the "normal" categories that each one has at his disposal. The "political" categories that were applied to the conclave concealed an ultimate incapacity to face a phenomenon that, today as yesterday, is disconcerting. The fact that these categories have repeatedly been proven wrong (with John Paul II, Benedict XVI…) is not enough to discourage people from applying them–what is necessary is an exhaustive explanation of the phenomenon that we see. Or, more accurately, it is necessary that this explanation happen.

Well, the Catholic Church happened before our eyes in the intense dialogue between Pope Francis and the crowd in St. Peter's Square. The people's expectation while the Cardinals were voting in the conclave revealed a confident community that, at the same time, needed a shepherd, around whom springs up a unity that is always surprising in a world like ours, accustomed as it is to division. The white smoke set off a boundless joy that must have provoked the question, "How can they be so happy, if they don't even know who was chosen?" in more than one person. The expectation grew as the curtains moved, revealing the desire to meet, to see, and to hear the shepherd, just as, almost 2,000 years ago, Aquila and Priscilla, natives of Rome who were converted by Paul in Corinth, wanted to meet Peter, friend of Jesus and first Bishop of Rome.
The Pope's first gesture arrived before his face did: he had chosen the name Francis, demonstrating from the very beginning where he wants to fix his gaze. Like the poor man of Assisi, the Pontiff declares that he has no other wealth but Christ and that he knows no modality of communicating this if not the simple witness of his life. And when he appeared before the faithful, with the cameras of half the world focused on him, the Pope showed, in action, what is the factor that lies at the origin of the Church: he invited the crowd to gather in prayer to God the Father, through Jesus Christ. In that moment, the Church happened before all of us. Like his predecessor, the impetuous Peter, Francis confessed, "You are the Christ, the Son of the living God." As He did with the first Bishop of Rome, Christ also entrusts to this man, in front of His flock, the keys of the Church.

The faith that is apparent in Francis's gesture, asking his people to beg for God's blessing, is touchingly the same as that of Benedict XVI when he reminded the entire world that the Church is Christ's. When he bade farewell to the Cardinals, Ratzinger recalled, citing Guardini, that the Church "is not an institution conceived and built in theory...but a living reality... She lives through the course of time, in becoming, like every living being, in undergoing change... And yet in her nature she remains ever the same and her heart is Christ." Hearkening back to the previous day's audience in St. Peter's Square, he concluded, "It seems to me that this was our experience yesterday in the Square: seeing that the Church is a living body, enlivened by the Holy Spirit and which is really brought to life by God's power."
We, too, can say, "We saw it yesterday." And now we say it with Peter, whose face we have come to know–and who invites us, as each of the Popes has done with his people, in the urbe and the orbe, to begin a journey together.