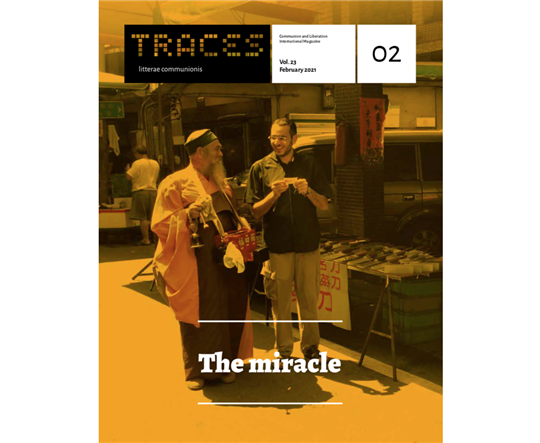 "The miracle that floors the world is when people who are strangers treat one another as brothers.” The title on the cover of this issue refers to these words, spoken by Fr. Luigi Giussani (the anniversary of whose death sixteen years ago is this month, on February 22nd) at a gathering in 1983. He said that there is nothing more impossible or more desirable than this new way of relating to others. It is the essence of the “shared human course” Pope Francis proposes in his latest encyclical, Fratelli tutti. But how is this possible when the problems are so complex that they stifle both our personal and collective lives? The pandemic has revealed preexisting inconsistencies, and as politics crumbles, the crises affecting the lives of millions of people seem to cover more and more of the globe, to the point of seeming unreal. The Balkans, Tigray, Syria, Guatemala. The list goes on and on.

The encyclical makes us uneasy about even the most ordinary conflicts and opens up many questions, with one question at the foundation of them all: How can being “saved together” go beyond a mere intention, a utopic dream, or a voluntaristic effort that would merely result in skepticism? In a world divided, where we have lost the ability to engage in “focused attention to penetrate to the heart of matters and to recognize what is essential to give meaning to our lives,” Francis writes that there can be no solid and stable reasons for an appeal to fraternity “without an openness to the Father of all. Only with this awareness that we are not orphans, but children, can we live in peace with one another. For reason, by itself, is capable of grasping the equality between men and of giving stability to their civic coexistence, but it cannot establish fraternity.” The text of the encyclical is very rich, as is its outlook on the world. Beyond any specific consideration, it requests participation in the great provocation that the church offers each of us.

In this issue, we wanted to look at how this discovery and recognition of each other as brothers and sisters takes place. We do so first of all through the witness of the small community in Taiwan, where every difference or distance among them is bridged by the overflowing treasure they have received: a living encounter with the Christian fact. Having an experience of being a son or daughter of God through a concrete companionship breaks open a new attitude. We captured the resulting gratitude, which pierces man’s heart to the point of changing him and his relationships with others in situations and countries all over the world. Because fraternity is a universal phenomenon, not an abstract one, the best way to see the encyclical incarnated will be through small facts happening in the lives of individual persons. “This is the miracle,” Giussani reiterated during the 1983 gathering, “and this is the reason for which we have been called.”