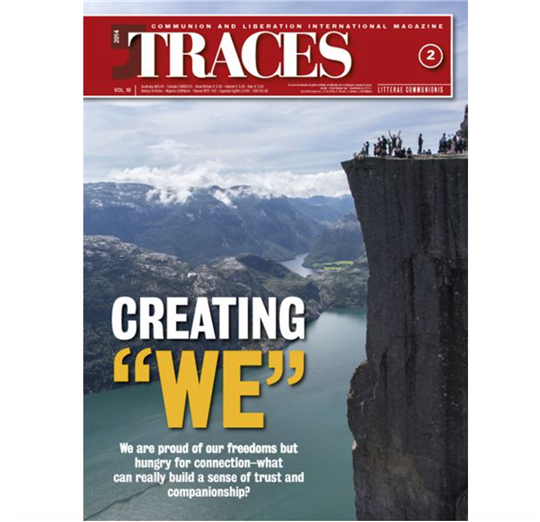 The tenth anniversary of Facebook should not give us pause–afterall, it is “unconscious habit” by now. But pause we must, stopped in our tracks when the disenfranchised state of not only our youth culture but of all aspects of our fragmented lives shows its fraying cords, through acts of violence against self and others, financial strategies that bring down whole economies, and bleak political scenarios that threaten the livelihood of generations to come. It seems the crisis in society is exactly a crisis in communication or, more aptly described by Fr. Giussani, “communionality.” That is, a human emergency. While this is certainly not the exclusive fault of a medium that opened the door to a global community which is more connected than ever before, it is curious (and contradictory) that we are flying along these digital highways toward an unprecedented level of superficiality in relationships and an “I-thinking” disposition in front of reality. Today’s dominant mentality, in fact, encourages us to “go solo” and write our own narratives. We seek to live a carefree freedom that borders on utopian escapism, including in the media, which frequently reports its own self-generated renditions of “stories,” instead of the truth.

Such individualism costs us nothing less than just that: the truth–about ourselves and how we are made and, most especially, where our happiness lies. In the words of one precocious 15-year-old: “Sadness is the gaze directed inwards...” What hope of happiness is there for man, who was already pessimistically described in the 1800s (by de Tocqueville) as “withdrawn... unaware of the fate of others”? According to Fr. Carrón, we need to “recover an adequate relationship with everything. ”
Using this key, relationship, we can crack open the bunker of our individualism, starting with the way to conceive of education, and work in the workplace, and face the urgent need for political dialogue–and every kind of dialogue, because in writing our own narratives, we have sacrificed the (even genetic) need for communal affirmation and unconditional affection.

This issue of Traces is full of witnesses living, and seeking to recover, the primacy of relationship for the discovery of each one’s identity and, with that, that which makes us ultimately happy.
Such communion has not been validated in action so clearly and dramatically in the eyes of the world as it was one year ago–another anniversary–when Pope Benedict affirmed his absolute certainty of this Mystery by stepping down from the papacy. His humility in the company of Another and in the face of the needs of the others ushered into the world a new factor par excellence: the real freedom of profound unity in a relationship, in a total gift of self. And now, through his action, we can better understand, more tenaciously follow his predecessor, Pope Francis, one who knows the difference between connection-by-clicks and true encounter, true self giving. In his communal prayer for the journey of poverty of each of us, his Lenten Message for 2014, he encourages us to look at how rich the poor Christ was: “Jesus’ wealth lies in His being the Son; [in] His unique relationship with the Father.” It is this abandonment to the “ultimate Other” that makes life open up, prevailing over whatever may threaten it. Because, as the Pope re-proposes, “What gives us true freedom, true salvation, and true happiness is the compassion, tenderness, and solidarity of His love.”