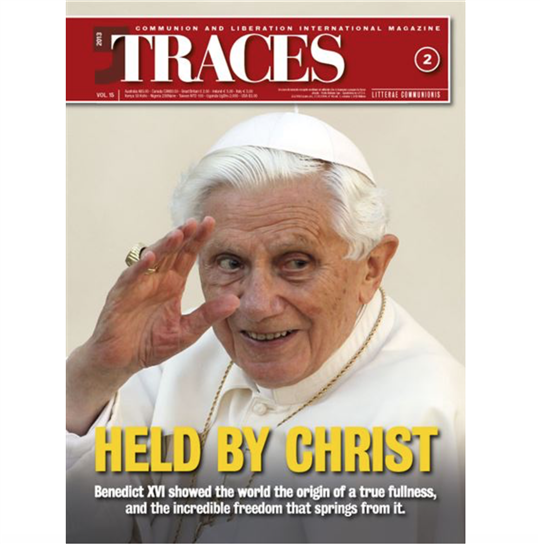 This issue’s editorial is the commentary by Fr. Julián Carrón, President of the Fraternity of Communion and Liberation, published by the Italian daily la Repubblica on February 15, 2013.

Dear Editor,
Your editorial about Benedict XVI’s announcement describes the situation in which we all came to find ourselves on Monday morning: “This is universal news, which travels around the world and stuns it. (…) It would be foolish to act as if nothing happened.”
For an instant, the world stopped. All of us, wherever we were, stood in silence, seeing our same amazement reflected on the faces of those around us. Everything was contained in that moment of silence. No communication strategy could have provoked a similar reaction: we were faced with a fact as incredible as it was real, a fact that imposed itself with such evidence that it drew us all, forcing us to look up from everyday things.
What was capable of filling the entire world with silence, all of a sudden?
That astonished moment destroyed, in one stroke, the images that we normally have of Christianity: a past event, an earthly organization, a group of roles, a morality about things that we should or shouldn’t do... No, all of this cannot give adequate reasons for what happened on February 11th. We must look elsewhere for the explanation.
Therefore, faced with the Pope’s gesture, I wondered: Will anyone ask themselves who Christ is for Joseph Ratzinger, if the bond with Him led him to carry out an act of freedom this surprising, which everyone–believers or not–recognized as exceptional and profoundly human? Avoiding this question would leave the event without an explanation and, what is worse, we would miss the most precious part of what it witnesses to us. It cries out, in fact, just how real the person of Christ is in the life of the Pope, how much Christ must be contemporaneous and powerfully present in order for him to generate a gesture of freedom from everything and everyone, an unheard-of novelty, so impossible for man. Full of wonder, I was then forced to shift my gaze to what made it possible: Who are You, who fascinate a man to the point of making him so free that he provokes the desire for the same freedom in us, too? “Christ in His beauty draws me to Him,” exclaimed another man passionate about Christ, Jacopone da Todi. I haven’t found a better explanation.
With his initiative, the Pope gave such a witness to Christ that it made all of His attractiveness shine powerfully through, to the point that it somehow grasped all of us–we were faced with a mystery that captured our attention. We have to admit how rare it is to find a witness that forces the world, at least for an instant, to fall silent.
Even if, immediately afterward, distraction was already pulling us elsewhere–causing us to slip (as we saw in many reactions) into the netherworld of interpretations and calculations of “ecclesiastic politics,” preventing us from seeing what really captivated us in the event–no one will ever be able to erase from every fiber of our being that interminable instant of silence.
Not only his freedom, but also the Pope’s capacity to read reality, to understand the signs of the times, announces the presence of Christ. In speaking of Zacchaeus, the publican who climbed a sycamore tree to see Jesus as He was passing by, St. Augustine says, “And the Lord looked right at Zacchaeus. [Zacchaeus] was seen and then he saw. If he had not been seen, he would not have seen.” The Pope showed us that only the present experience of Christ allows one to “see,” that is, to use reason with clarity, to the point of coming to an absolutely pertinent judgment about the historical moment and imagining a gesture like the one that he carried out: “I have done this in full freedom for the good of the Church, after much prayer and having examined my conscience before God, knowing full well the seriousness of this act, but also realizing that I am no longer able to carry out the Petrine ministry with the strength which it demands.” This is unprecedented realism! But where does it originate? “I am strengthened and reassured by the certainty that the Church is Christ’s, who will never leave her without His guidance and care” (General Audience, February 13, 2013).
The last act of this pontificate appears to me to be the extreme gesture of a father who shows everyone, within and outside of the Church, where to find that certainty that makes us truly free from the fears that ensnare us. And he does it with a symbolic gesture, like the ancient prophets of Israel who, in order to communicate the certainty of return from exile to the people, did the most apparently absurd thing: they bought a field. The Pope, too, is so certain that Christ will not leave the Church without His guidance and care that, in order to proclaim it to everyone, he does what, to many, seems absurd: he steps aside to leave Christ the room to provide a new guide for the Church, with the necessary strength to perform the task.
But this does not reduce the value of the gesture to the Church alone. Through His care for the Church, according to His mysterious design, Christ places a sign in the world in which everyone can see that they are not alone with their impotence. Thus, “in today’s world, subject to so many rapid changes and shaken by questions of deep relevance,” which often cause confusion and dismay, the Pope offers to every man a rock to which he can anchor the hope that does not fear the daily storms, allowing him to look to the future with confidence.