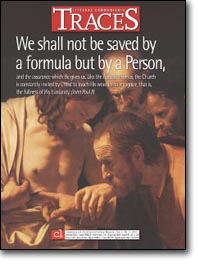 If 2000 was the year of the Jubilee, what will 2001 be? Already many have let themselves be tempted by the reference to Stanley Kubrick’s famous film, 2001: A Space Odyssey. In effect, many of the questions now on the table have to do with the problem of the development of science and technology (eugenetics, biotechnology, transgenetics, artificial intelligence). It seems that, besides continuing his journey through stellar space, contemporary man lives also his journey through daily reality as an odyssey: his points of reference vanish, everything seems to be corroded by skepticism or reduced to a pure battleground of interests, generating subtle and even evident forms of violence. Life appears to many to be a senseless wandering and, to use Manzoni’s words, “a burden for many and a feast for some.”
We too take the liberty of choosing a symbol for this year 2001. It is not an important politician or a movie star. Our symbol is a poem, published for the first time 170 years ago, in 1831. It is entitled Canto notturno di un pastore errante dell’Asia, or Night Song of a Wandering Shepherd of Asia. When he published it for the first time, in the so-called “Florentine” edition of 1831, Giacomo Leopardi called the shepherd “vagante,” “roaming.” But the meaning was analogous, just as it is analogous to the feeling which most people have about themselves. Life seems to be a more or less fortunate roaming from one nothingness to another, wearing various masks.
But the poem at a certain point, in a strong crescendo of questioning, bursts forth with a great question that is made urgent by reason, which has opened itself up to considering the presence of the sky, the moon, the flock–in a word, reality, things, whether very great or very small: “What does the infinite air serve, and what the deep infinite sky? What does this boundless solitude mean? And what am I?” 2001 will be the year of this question: “What am I?” Third millennium man, with all the conquests of his capabilities, cannot help asking himself this question. Otherwise, he will lose his very capacity to reason, to know.
“What” am I: it is not a problem of psychological identity; rather, it is a matter above all of discovering what makes me, on what and how does this seemingly small and yet so crucial reality that we call “I” rest. This discovery is necessary so that every constructiveness in personal and social life and every new start may be possible, against all adversity, and against the bewilderment caused by the inevitable clash with the limitations of our condition. To be sure, Leopardi’s question could seem thorny and inopportune to an epoch that has abolished all the gods except usury, lust, and power, to use T.S. Eliot’s words, and for this reason no longer knows of whom to ask the great question. But it remains the only question that every person, whether he is aware of it or not, discovers every morning when he wakes up. For the very fact that it exists, the “I” cries out an entreaty for meaning to the Mystery to which everything owes its existence and whose response determines the possibility of security in life: it was like this for the Hebrews at history’s beginnings and is like this for us now, Christians of the year 2001.
The first song which expressed the genius of the Movement says: “Poor voice of a man who is not there… all of life asks for eternity.” This last phrase beautifully provides the title for the next Meeting in Rimini.