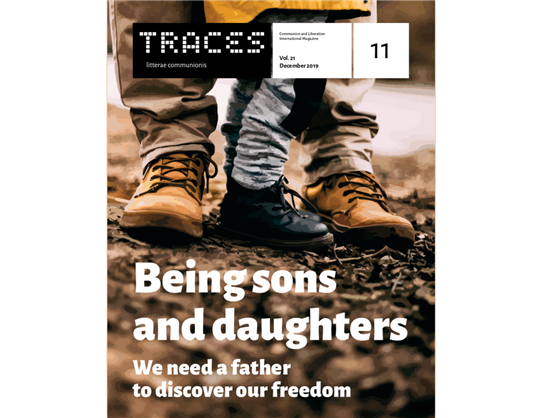 In recent issues of Traces we took up a critical theme from the CL Beginning Day, the meeting at the beginning of the social and academic year that marks out the movement’s educational proposal and lays a path for the year’s work. The articles described the context that surrounds us–a “passive nihilism” that envelops our society and our lives, sapping our energy, enjoyment, and desires– and pointed to the one thing that can rescue us from that nothingness: witnesses. Witnesses are people who reveal a different way of living, who transmit such a fascinating proposal of meaning in life that they become authorities. Or rather, fathers and mothers, because they generate others and help them grow.

This is such a crucial topic that we have decided to return to it. We hope to get to the bottom of this “authority,” a word that has nothing to do with power, as Fr. Giussani emphasized in the talk transcribed in the pages of the Beginning Day, but is rather “a synonym for paternity.” These are its unmistakable traits: “It is the place where new life is clearer and more transparent;” it “makes itself visible in the experience of greater freedom;” and, precisely because of this, it is also a “place of comfort, where you see that Christ conquers,” a place, that is, that makes it possible for us to stop feeling caged in by our struggles, sufferings, and circumstances. There, the “I” can breathe and always be joyful. It is what we all seek. Who would not want to discover an experience of greater freedom and joy? Who does not want a life that is more useful, fuller, and capable of “opening new pathways” in a world that seems impermeable to faith, but that actually offers Christians a great opportunity?

This month’s “Close -up” is a journey toward discovering that kind of paternity. In focusing, as always, on stories in addition to reflections that help us to go deeper, once again the only valid criterion is experience. We describe a “paternal authority” that, because it is not confined to a role (not even the traditional ones: parents, teachers, priests, other leaders...) happens as it will. You have to look for it in action. “The old woman who puts the coins in the treasury of the temple can be an authority, even more than the head of the Pharisees,” Fr. Giussani reminded us. This is an authority that does not impose itself through mechanisms of power, but simply asks us to recognize it.

In the end, this was the experience of the shepherds depicted in Caravaggio’s Adoration of the Shepherds, which CL has chosen to depict in the Christmas poster. They looked upon the least powerful person in the world, literally the last to arrive: a newborn baby in a manger. Yet, in the simplicity of their hearts, they could intuit how that Son made visible the Father, the mystery who was generating them in that very instant, and who is generating us right now. Merry Christmas.