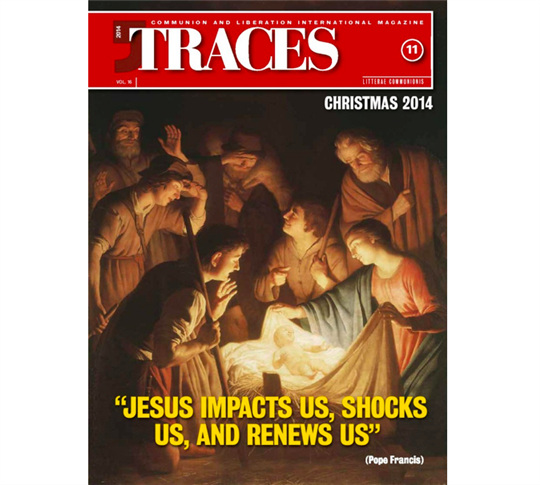 So then, what are we here for? The reason is dual, and the second is the consequence of the first; one could say, immediate or contingent consequence of the first. The first is: we are here to say...We were walking along a road, we heard someone talking, an ideologist who was speaking, but who was more than an ideologist, because he was a serious fellow, called John the Baptist. We stayed there to listen to him. At a certain point, one who was there with us began to leave and we saw John the Baptist stop to look at that fellow there who was leaving, and at a certain point he started to cry out,“There is the Lamb of God.”Well, a prophet speaks strangely.But the two of us, who were there for the first time, we came from the countryside, from far away,we left the group and set out on the heels of that man, just like that, out of a curiosity that was not curiosity, out of a strange interest–who knows who put it inside us. He turned around at a certain point and said,“What do you want?” and we replied,“Where are you staying?” and He answered,“Come and see.” We went and we stayed there all that day to watch Him speak, because the words He said we didn’t understand, but He spoke in a certain way, He said those words in such away, He had such a face that we stayed there to watch Him talk. When we left, because it was evening, we went home with another face, we saw our wives and our children in a different way; it was as if there were a veil between us and them, the veil of that face, and our minds could find no rest. That night neither of us slept well, and the next day we went again to seek Him. He had said a sentence that we repeated to our friends,“Come and see one who is the Messiah who was to come; He is the Messiah, He said so Himself:‘I am the Messiah’.”And our friends came and they, too, were magnetized by that man. It was as if we said to each other, in the evening, when we gathered close to the fire with the four fish we had caught the night before,“If one does not believe in a man like this, if I do not believe in a man like this, I shouldn’t believe my eyes anymore.”

We are in the world to cry out to all mankind, “Look, a strange presence is among us; among us, here, now, there is a strange presence: the Mystery who makes the stars, who makes the sea, who makes all things... has become a man,was born of the womb of a woman...”We are in the world, because to us and not to other sit was made known that God has become a man.There is a man among us, one who came among us two thousand years ago and who has remained with us (“I will be with you all days, to the end of the world”).There is a man who is God. The happiness of humanity, the joy of humanity, the fulfillment of all the desires of humanity is He who bring sit to its conclusion; He brings it to its conclusion for those who follow Him.

The contingent consequence of looking at Him, of watching Him speak, of listening to Him, of following Him, of saying to everyone,“He is here, He is here among us, the God made man...”, the contingent consequence for those who say this, is that they live better–better.The problems of their humanity are not necessarily resolved, but they live them better.They love their spouse more, know how to love their children more, and to love themselves more; they love their friends more than the others, look at strangers with a generosity and tenderness of heart as if they were friends, and come to the aid of others as they can, as if their needs were their own needs. They look at time with hope and therefore walk with energy.