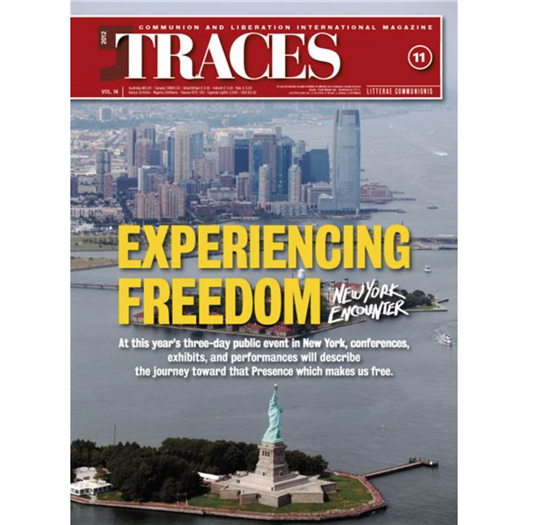 He was a presence, right from the start, from the first cry in that grotto in Bethlehem, where those who looked in saw something that appeared so ephemeral it might have seemed insignificant–a baby, a newborn, a puff of smoke, in the eyes of the world. But the scene they beheld was laden with an announcement, absolute and alienating for its difference from anything ever seen on earth: “Today a Savior has been born unto you…” And thus Christianity entered the world, with a presence that at first appeared ephemeral, defenseless, but which held a promise of fullness–so radical that it changed history forever.
From then on, there is a question that bores into the lives of those who are taken hold of by Christ: what does it mean to be present, to leave a mark on history? This is not secondary; it coincides with the nature of the Christian experience, of faith–much more than many other questions regarding morality, politics, work, or behavior. If Christianity entered into the world in this manner, it must mean something for the way in which it remains and acts. And so, what does “presence” mean?

This question is the central theme of this issue of Traces, starting with “Close-Up.” It is striking to think that the Christians living a few miles from that grotto are in the same condition as that baby: defenseless and powerless in the eyes of the world. Earthen vessels among vessels of iron, ready to be shattered and swept away by the bombs exchanged by “the others.” And yet, in their presence lies everything. There is a serenity that one cannot help but notice, with surprise. There is a diversity of life that is striking, both to us and to their fellow citizens. In a word, there is a witness. They are the sign that in their lives–in the life of man–an Other has entered. And this Other allows them to live amid the bombs. Or, in other places, this Other allows them to bear the impact of the economic crisis, as you can read in “Page One,” which reports Julián Carrón’s speech to an audience of 2,000 entrepreneurs. Or to live as protagonists at the upcoming New York Encounter cultural event, without the focus being on “doing” and “organizing,” but on what He does. It is, indeed, as these witnesses attest, possible to be free in the thousand ways in which daily life unfolds.

A presence, not a “doing;” a witness, not a quest for power: this is what Christianity is and always has been. Benedict XVI, who just wrote a beautiful book focused precisely on the childhood of Jesus, on the years in which the Mystery took His first steps in the world as a child, has also touched on this theme in the homilies that interweave this Year of Faith. He was not talking about the beginning, but about the end, or almost–the last hours of the earthly presence of Christ, just before the Cross: “Faced with a defenseless, weak and humiliated man, as Jesus was, a man of power like Pilate is taken aback,” the Pope says. “Taken aback because he hears of a kingdom,” of a king, of another power. And the questions arise, the same ones that Christians constantly face: Can there be a higher power in life? A power “which will never pass away or be destroyed”? We know the answer; we have heard it many times: “You say I am a king. For this I was born and for this I came into the world, to testify to the truth.” Testify. We have heard it. But it is vital that it become ours.