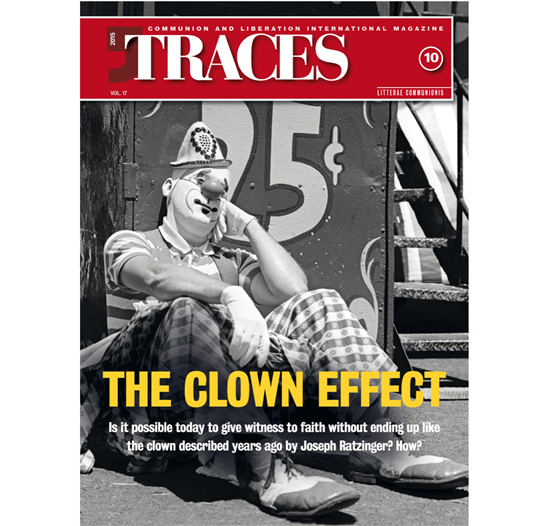 Many of our readers will have already guessed the inspiration for this cover. Others may not, because they weren’t present and haven’t read the text of that meeting last month (CL’s Beginning Day in Italy), in which Fr. Julián Carrón surprised those present by reading a page from then-Cardinal Ratzinger’s Introduction to Christianity. It was the “story of the clown” used by Søren Kierkegaard. A fire suddenly breaks out at a circus. The owner sends the clown, already dressed for the show, to the nearby town to ask for help. The residents think it’s a gimmick to draw the people to the show. The more he yells, cries, and begs, the more they laugh. Until the flames reach the town... This, Ratzinger said, is more or less the same risk that Christians run: the harder we try to speak about faith to men and women today, the more we appear strange, eccentric, and incomprehensible. The words spoken are true, unchallengeable, and even sacred. But they fall on ground that cannot absorb them; they seem otherworldly, unbelievable. Often, it’s not because of the world’s ill will or prejudice against them. It’s because they build on evidences that are no longer perceived as such, as the appeal to reason is undergoing an “odd darkening of the mind,” (to use another expression from Benedict XVI). Thus, we are put in front of a crucial question: How can the faith be credible–and interesting–once again today?

Deep down, it’s the same question presented by the Synod on the Family, which ended recently. Not by chance, the themes of the two rounds of consultations to which Pope Francis called the Church were “pastoral challenges” (in October 2014) and “the vocation and the mission of the family,” from last month. It’s a recurring theme, dramatically incarnated in one of the most vital and precious realities in the life of men and women (the family): How can we live and propose the beauty of marriage, the captivating challenge of “forever,” in a confused and individualistic world, where even the most basic evidences (man and woman, father and mother) are no longer universally recognized? These days, it’s very striking to reread a passage from the Gospel of Matthew, where Jesus speaks about the indissolubility of marriage,something written in human nature (“for your hardness of heart Moses allowed you to divorce your wives, but from the beginning it was not so”). The response of the disciples is also striking in its blunt spontaneity: “If such is the case of a man with his wife, it is better not to marry.” Better not to.Which is to say: what you propose is unthinkable. It’s impossible; it’s incompatible with the way we’re made. It is part of the clown’s act, we could say, because it’s the same objection we see today.What overpowered their objections? What opened them up to a horizon of possibility where that life–that new morality–was not only possible, but even desirable?

This Traces speaks to that question. Or better, it seeks to demonstrate the response. To show how it can happen, when it happens; how Christianity can become interesting again, how it can become relevant again for those who thought the game was already over. It happens among the residents of a London suburb and to a physician–who is also an an entrepreneur–in the U.S., or wherever men and women are living today. The method that puts us back in the game is always the same: an encounter with a human reality (a person, a companionship) that fascinates and attracts us simply because their way of life (not just their words, but how they live) is fuller, more beautiful: more human.And it opens up prospects that we hadn’t even imagined were possible. An encounter and a companionship. Just like the disciples; it’s the same thing.It doesn’t happen because we speak about Christ or say the right things (which, of course, need to be said). It happens because He is here, now. And because we can live with Him.