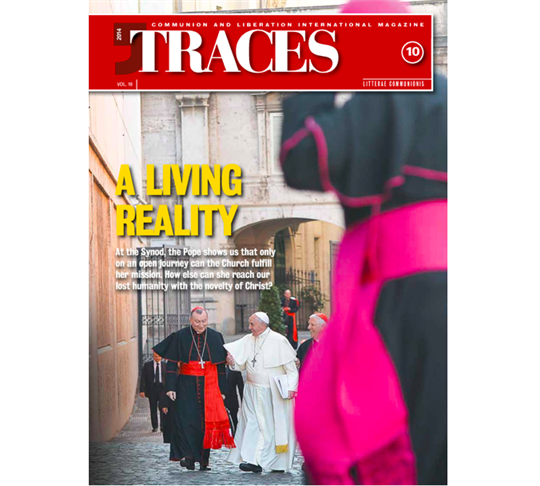 Strange attitudes are emerging in certain sectors of the Catholic world. This phenomenon was clearly seen, for example, during the Synod on the Family, not so much in the debate among the Synod Fathers on the “new challenges” confronting family life today (a debate that was much richer than the various interpretations of it imply), but in the many commentaries responding to the Synod that circulated in newspapers, blogs, and on various websites. They are comments that cannot be framed within the“conservative-progressive”mindset. In a more or less explicit–sometimes even vulgar–way those comments are a sign of feeling lost, of finding oneself disoriented.This happens a lot now when topics touch upon ethics or the so-called“new rights.” It is as if, because certain issues are being discussed openly, the Church risks losing its course; as if accompanying today’s wounded and lost humanity were synonymous with losing oneself in the chaos. Today,despite the fact that two thousand years of Christian history are full of moments of confrontation even more tense than what we see now (and recognizing that if this“feeling lost” gives in to fear,then it should force us to ask ourselves Who we really think is at the helm of history) this disorientation is understandable.Reality puts us in front of challenges that were unthinkable only a few years ago–and here “unthinkable” really means unimagined, unexpected, and not immediately reducible to pre-conceived categories. It is even more true that“a world that is changing so rapidly asks Christians to be available for finding ways to communicate, with a language that is comprehensible, the perennial novelty of Christianity,” as the Pope reminded us at the Meeting of Rimini.

When you read it, it seems clear. Why then, when we hear it talked about or see in action the search for “new ways” (like at the Synod), is our conditioned reflex of resistance, concern, and fear of losing that treasure triggered? In one of his principal texts, Why the Church?, Fr. Giussani, speaking about the magisterium and the “communication of truth,” points out the way in which theChurch gains awareness of herself and of this treasure.“All that happens in each of our lives, as ourself-awareness matures with the passage of time, also occurs in the life of the Church,” he writes, “Therefore it is important to remember that this maturing process follows a certain course...the Church lives and operates in the realms of time and space. It charts its itinerary of self-awareness and in this,so that it may fulfill its mission and therefore avoid the trap of ever defining an error, it is assisted by the indefatigable Spirit of Christ. This assistance, however, does not spare the Church the fatigue and work of evolutive research for the precise reason that the Church’s nature as a ‘body’ that is certainly divine but also human is incarnated in time and space.”
We are not exempt from the fatigue and the labor of this development, of this growth; but, neither is the Church, precisely because she is a living reality. And, doing this work, finding new ways to communicate the eternal, is not “something less.” It is not a loss of certainty or a leap into the darkness. It is an enormous richness, the possibility of discovering oneself and reality more and more.It can be a beautiful path(which is, not by chance, the title of the recently produced video commemorating 60 years of Communion and liberation,“La Strada Bella”).It will always be a journey.It is a journey for everyone, at any age, and in every part of the world,which is possible with only one very simple condition, which the Pope reminded us of in the same message, in lines that we should commit to memory: “The Christian is not afraid to decentralize... because his center is in Jesus Christ. ”What is our center?"