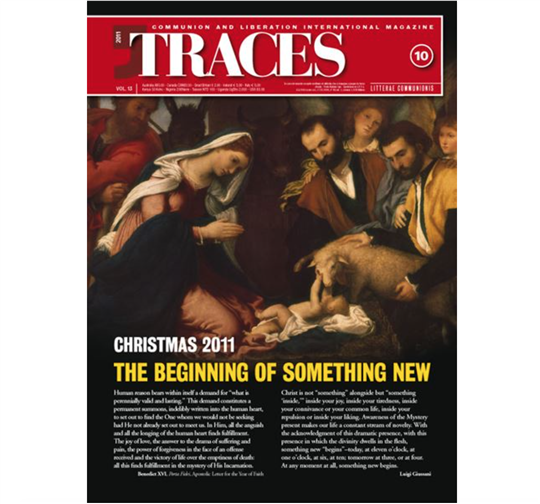 At first glance, it takes a lot of courage to say that reality is positive, above all these days, when a wind of serious crisis is blowing strongly and shaking the whole world. This crisis is not limited to finance and economics, as you can read in this issue of Traces. It concerns humanity, our relationship with reality, our way of staying before things. And yet, the first contribution we can offer those facing this crisis–those out of jobs, or poorer, or in difficulty before certainties that seemed solid and now are no longer so–is precisely to point to this fact, one that is structural and ineradicable: reality is positive. It bears within, in and of itself, a good. It is always a provocation that solicits, calls, “challenges us to change,” as it says in a document that Communion and Liberation is circulating these days, starting in Italy.

But how can one say this? Where does this courage come from?
In a recent public gathering, Fr. Julián Carrón–the leader of CL–faced this question head on, with such a linear clarity that it is helpful to use his words here.

First point: saying that reality is positive is not “a Catholic interpretation.” It is not the application of a religious preconception that makes us see a good where it does not exist, while “others who do not have this starting point interpret it differently. No! This is the challenge: it is not a matter of ‘baptizing’ reality, but of recognizing it in its true nature.” What is this true nature that reason is called to recognize? “Everything that exists, inasmuch as it happened, inasmuch as the Mystery permitted it to happen–because everything has an origin in that You–by the fact that it happened, is a provocation for our life, that is, an invitation to change. It is the opportunity for a step toward destiny. It is for us; it is a road, an instrument for our journey, a sign. Let’s say it: reality is a sign.” For this reason, “it is ontologically positive;” it is such in and of itself. If we do not recognize this, it is because for us “positivists” it means something else: “desirable” or “appreciated.” The crisis certainly is neither. So then it seems like a lie to talk about positivity, but the reason for this weakness comes earlier: “If we do not reach the point of seeing anything as the presence of a You who is at the origin, then we are incapable of saying that reality is positive.” Is the problem faith, then? No. The problem is reason. Such a recognition of reality implicates a full, not reduced, use of reason, one that is not “positivist,” as Benedict XVI recently reminded us. Reason “is made to grasp reality as a given, vibrant with attraction, as provocation and as invitation.” Instead, “because of our fragility and because of the conditioning of the context that surrounds us,” we often use it in a weak way, as if reality were only what one sees, and not a sign of this You.

Now comes the decisive contribution Christ came to give us. “Since we are in this situation, Christ became incarnate, became flesh, not in order to spare us this work of reason, but to become our companion, to reawaken all the possibility of reason to recognize reality as it is.” In short, “to make us become women and men in such a way that we can look at reality according to its true nature, without being visionaries.” Our hope is born here. This is the contribution we can offer those facing the crisis. Not another analysis, another line of reasoning, another complaint, but instead, a challenge to use reason in a true way, precisely as the Pope continually calls us to do. A person who begins to do this, who recovers this unreduced way of looking at reality, begins anew. In the face of difficulties, he or she begins anew, does not give up. And this is a good for all, because the energy of the “I” is not exhausted in itself, but builds a people.

We have seen it throughout our history. It has always been this way. Our society has grown in this way. It has overcome every difficulty, every dark moment this way: beginning anew from this impetus toward a good that is not sentimental, but rather, reasonable. Why should it not emerge from the crisis this way?