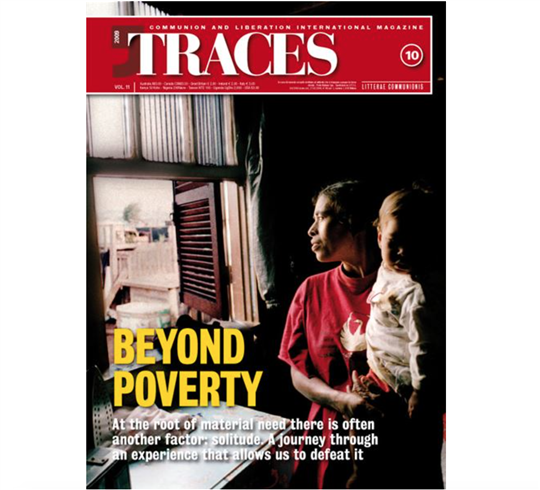 There is an event that has marked the month of November for some years now, in Italy and not only Italy, as, little by little, it is becoming a global event, with expressions in Europe and South America. It is the Collection Day, organized by the Food Bank (which this year is on November 28th), a day that people add something to their grocery shopping so as to offer some food to help the poor. It is the high point in the year for the Bank, since it supports, in Italy alone, 8,000 groups and associations (first of all, the Solidarity Banks). In 2008, 100,000 volunteers were mobilized in Italy and, this year, there were probably more. We can call it the gesture of a people. Paradoxically, though, it involves a risk. The risk is something more subtle, something which, oddly, lies in the very simplicity of the gesture.
After all, the Collection is like a circle that fits together perfectly. There are people who struggle to get to the end of the month and often have no money for food. There are those of the Food Bank who collect food throughout the year that otherwise would be thrown away. Then there are those who distribute it to the poor (the Solidarity Banks and other associations). It’s a great idea, an intelligent application, and an organizational machine that works. Fine.
From the outside, one could stop there, at the fine gesture: big, moving, capable of making the news headlines; but destined to vanish a few days later for those not directly concerned with the Bank, or the Banks, or of those who receive the food parcels.

But no. On that Saturday in November–and what arises from that day–there is much more. There is everything–you just have to scratch away the surface of stereotypes of the “crisis” and the “new poor” to find what Benedict XVI pointed out in a passage of his last encyclical, Caritas in Veritate: “One of the deepest forms of poverty a person can experience is isolation. If we look closely at other kinds of poverty, including material forms, we see that they are born from isolation, from not being loved or from difficulties in being able to love.”
People are poor because they are alone. Many times, before being a question of joblessness, of money, or even of hunger, poverty is loneliness; it is the need for relationship rather than assistance. It is as important as food, or even more important than food, because it is not just any relationship that is lacking, for the poor as for everyone else: it is “the” relationship, the link with meaning, with what gives meaning and dignity to everything, with the Mystery. It is no coincidence that the Pope continues, “Poverty is often produced by a rejection of God’s love, by man’s basic and tragic tendency to close in on himself, thinking himself to be self-sufficient or merely an insignificant and ephemeral fact, a ‘stranger’ in a random universe. Man is alienated when he is alone, when he is detached from reality, when he stops thinking and believing in a foundation.”

The heart of a gesture like that of the Collection, and of the work that it implies throughout the year, is precisely this. At the origin of that simple and perfect circle, drawn by the Bank and the Banks and by many other associations–and we could say by all forms of true charity–there is something beyond, a factor that is more important than the groceries given to those in need. There is the “Foundation,” to use the Pope’s expression: Christ. Being able to recognize Him is what begins truly to overcome loneliness–the loneliness of those who receive and that of those who give.