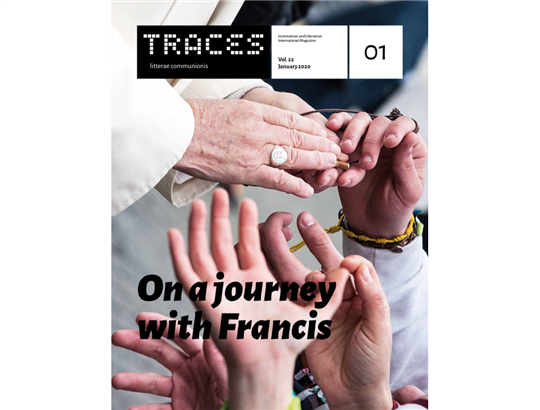 Words and gestures, together. Each gives flesh to the other, showing the full depth of both and making them the object of experience. This is how Pope Francis is broadening hearts and reason, even in those who are far from Christ, in those who have never known Him or recognized Him. This is how he has become a witness for all people. We saw it right away, in the first moments of his pontificate. And the more familiar you become with him, the more this capacity to touch deep into our heartstrings, which had become unreachable even by more coherent or better–reasoned arguments, becomes apparent. What was it like to see him up close and in action? What can we learn in staying by his side and in following his footsteps as he encounters, speaks, looks at, and embraces all the people?

A journey with the pope is an experience that opens a window onto his person and onto the world, and in this issue of Traces we invite you to share the view from that window. Our inspiration was the presence of a Traces journalist on the flight that brought Francis to Thailand and Japan some weeks ago. It is a far-away universe for the “Christian West,” but one that is immersed in the same questions and problems, which he summarized in a powerful expression: “The loss of the meaning of life.”
The detailed account of the pope’s week is more than just a chronicle of an apostolic journey, as important as that is: it is an opportunity to step into his shoes, into his thought, into the way he acts as he seeks to respond to the drama that suffuses every aspect of the lives of contemporary men and women. It is a chance to look at his way of looking, to see what he follows and how he does it. It is also a way to better understand the origin of his fatherhood, the authoritativeness that allows him to reawaken the humanity and sense of expectation in everyone–in continuity with our theme in the last two issues of Traces.

It is for this that the world is thirsting. You can also see it in the other pages of this magazine, from the story of the Fraternity of Saint Joseph, a profound and singular example because of the way the order makes Christ present in the world, to the witnesses in the letters and the points of emphasis found in the other articles, where you will see windows being thrown open and the adventure of living the meaning of life beginning again.