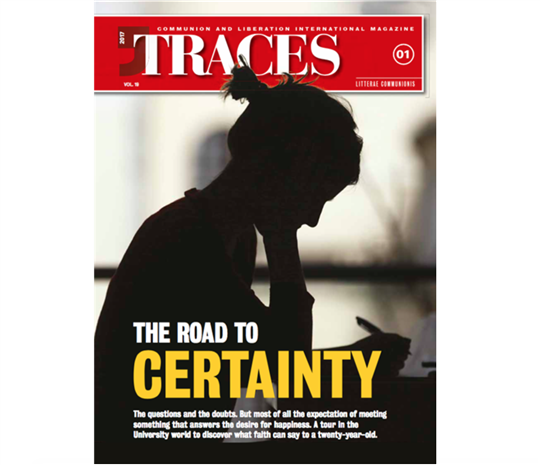 If there is one word we hear often these days, it is beginning, a lovely word in and of itself, but at times also a difficult, if not even wearisome one to hear and use, because it concerns not just the year that is starting, but also all the unknowns that it brings with it. In Italy, the referendum to change the Constitution has been put on the shelf, the Government has changed, but the problems are the same as ever, and at times it seems we are forever returning to the point of departure. But the word beginning is difficult also in the broader world, given that January brings the start of the unforeseeable Trump presidency, the big unknowns about Europe, the echoes of the terrorist attacks of Berlin and Ankara, the war in Syria… Thus the idea of starting over can seem to be an idea already full of shadows and distrust. Or–just as frequently–it can seem like the same old routine, as if the new year couldn’t bring anything really new.

But instead, as Pavese wrote, “the one joy in the world is to begin. It is beautiful to live because living is beginning, always, in every instant.” If you think about it, there is no action or sentence that is not a beginning, even the most everyday gesture, even the most taken for granted and repeated word (leaving the house in the morning, saying “hi” to a friend), is always a bridge erected between my “I” and reality, and always expresses expectancy, a desire for good, whether conscious or not. Realizing this fills time, giving it a different heft and gusto, making it an opportunity to discover something about yourself and the world.

This is what you discover thumbing through this issue of Traces. It happens in university classrooms when 20-year-olds who are burning with questions and uncertainties happen to run up against another way of living, and this encounter becomes a road to verify a proposal for oneself. A beginning. Or for those who are older, when this earned verification slowly but surely makes someone so certain and grounded that she can even face six years in a gulag and begin again, forgiving, as with the life of the Lithuanian Nijole Sadunaite. Another beginning. These things are shown in other articles and testimonies, too.

But the heart of this issue is revealed as you turn the page now. You will find a gift that Pope Francis gave to the whole movement of CL, sending Fr. Julián Carrón a very beautiful letter that we should study attentively, because it makes us understand what enables this beginning, where it finds its nourishment. He does this by pointing to a radical program: “Going back to our origins is not a form of reverting to the past, but it is the strength for a courageous beginning directed at tomorrow.” We hope you enjoy reading this issue, and wish you a good beginning to this new year.