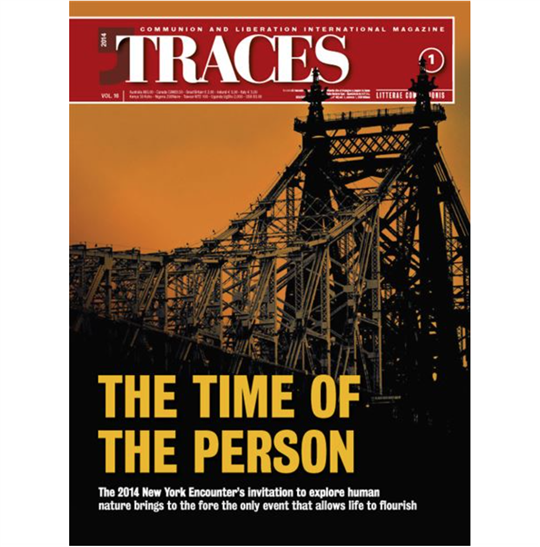 January 21st, in the news: the UN rescinds Iran’s invitation to talks on Syria; the crisis in Sudan escalates around oil; Ukrainian unrest has become violent; a tug-of-war continues in the GOP power grab as tension between parties hunkers down to pounce on upcoming midterm elections; the HHS mandate enters 2014 facing-off with religious liberty in the Supreme Court; youth lost in myriad choices and virtual past times need (and make every effort to avoid) guidance from mature adults; and the economy... hobbles into 2014. But in this milieu of modern society, we begin our day first with the self we inhabit, and the promise remains, within the question we reiterate: “How does one live?” This is not simply a question for “religious” people; judging from the news of today alone, it is everyone’s concern.
Also recently in the media was this headline from the Christian News Service: “Thousands in NYC Answer Pope Francis’ Call to be a ‘Church on the Streets’ During Annual Cultural Festival.” And on the streets it was, planted dead center in midtown Manhattan in a public meeting space flanked by sidewalks teeming with humanity. The announcement introduces with enthusiasm the theme of the 2014 New York Encounter, “From ‘I’ to ‘We’: The Time of the Person... The Origins of a People,” praised by Archbishop of New York, Timothy Cardinal Dolan, when he said, “Your focus on the nature of the human person, and the flourishing of the human person in belonging to a people, is very much in keeping with Pope Francis’ exhortation that ‘it is vitally important for the Church today to go forth and preach.... The joy of the Gospel is for all people: no one can be excluded.” And indeed, it seemed that no one was excluded from this three-day cultural event that hosted 4,000 people, including the Cardinal himself. What seemed to resonate most strongly was the aspect of personal experience, as one attendee described at the NYE: “I am getting a broad look at so many diverse aspects of life, but somehow this broad scope does not leave me out; I did not expect to be drawn in like this.”

It was no coincidence that the annual North American Diaconia of CL leaders took place on the eve of this festival, as if to reinforce the need to start with the profound inquiry about life that can only be catalyzed first within the person–and can lead to the surprising embrace of love. Fr. Julián Carrón journeyed to the USA just for that, to look each person in the eye and ask, “How do you live? What generates you? How can we help each other to know the Source of life?” Carrón even found time to meet personally with hundreds of college and high school students to encourage them to keep these sometimes painful questions open, as they will surely lead to something beautiful.
For the people of today, young and old alike, the path is littered with stumbling blocks, from heartbreak and apathy to ambition and violence, and the questions and yearnings of the “I” need to be faced also as a “We” who support each other and move together during this “end of an epoch that we can outline with certain clarity, and the beginning of a new one that is still to be constructed,” as was described by NYE guest Bernhard Scholz.
This issue of Traces highlights the “thinking hearts” full of awe for life whose educative witness fortifies our courage to move beyond stumbling blocks to the constructive discovery that “an encounter with the living Jesus, in the great family that is the Church, fills the heart with joy, because it fills it with true life, a profound goodness that does not pass away or decay” (Pope Francis, August 4, 2013, following World Youth Day).