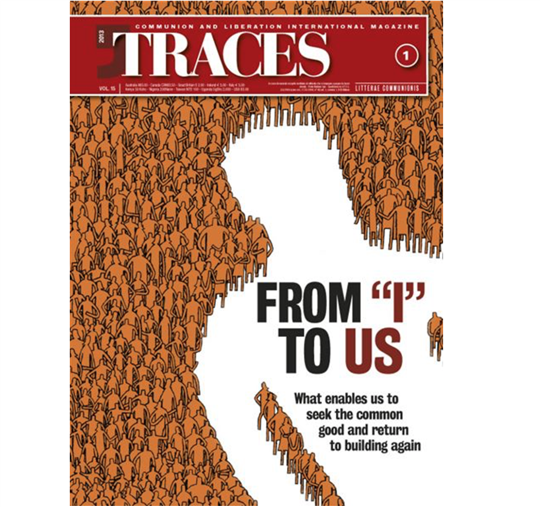 This issue’s editorial is an article by Julián Carrón, President of the Fraternity of Communion and Liberation, published by the Italian daily Corriere della Sera on December 23, 2012.

Dear Editor,
The difficulties that we find ourselves facing, from the personal (job insecurity–if not loss–illness, human frailties, existential confusion, evil committed or suffered) to the collective (economic crisis, social distress, political confusion, international uncertainty), are so overwhelming that they could induce us to consider the disappearance of every expectation inevitable. And yet, never before as in these circumstances does it become evident how true are Dante’s words: “Everyone can vaguely apprehend some good / in which the mind may find its peace. / With desire, each one strives to reach it.”
But what loyalty is required in each one of us in order to recognize this expectation and this desire for good! What makes this recognition so difficult is the social clamor that we all contribute to generating with our connivance. In fact, “everything conspires to keep quiet about us, partly out of shame perhaps, partly out of some secret hope” (Rilke). Each of us knows well how much of a contribution he is making to this conspiracy.
Who is victorious? The part of us that waits in expectation, or the part that conspires?

Cesare Pavese gives us a hint of a response, having grasped like no other the persistence of this expectation in us: “What a great thought it is that truly nothing is due to us. Has anyone ever promised us anything? Then why should we expect anything?” In fact, why do we go on expecting, even in the most desperate situations? Why is no personal defeat or historical crisis able to eliminate from every fiber of our being the glimmer, though unconscious, of an expectation? Because this expectation constitutes us in our depths, so much so that “it still appears today, in many ways, in the heart of man” (Benedict XVI). Though reduced, neglected, or opposed, the heart does not cease to desire.
Not infrequently can the impossibility of tearing this expectation out of ourselves seem like a condemnation. But the most insightful souls identify the true condemnation elsewhere. In This Business of Living, Pavese again reminds us: “Waiting is still an occupation. It is having nothing to wait for that is terrible.” We all know what life becomes when we no longer expect anything: boredom, which leads to desperation and cynicism. Waiting in expectation is the structure of our being. The substance of our “I” is expectation.
Now, despite this original structure of ours, we often have a hard time hoping. Péguy is right when he notes, “In order to hope, you have to have received a great gift or grace.” But what grace could be up to the challenge, and sustain hope in front of any eventuality?

The event that we celebrate at Christmas comes to meet us precisely at this level. The Christian announcement is directed toward the “I” of each one of us, challenging all skepticism and distrust, as an unexpected response to our wound. In order to make Himself a response that man could experience, the Infinite assumed a finite form. In the event of Christmas, the otherwise unbridgeable distance between finite and Infinite is abolished.
From this perspective, having faith does not mean submitting to a series of precepts, studying a doctrine, or participating in an organization: Christian faith is recognizing the divine present in the human, as it was for Simon, Mary Magdalene, the Samaritan woman, and Zacchaeus, all struck by a presence that awakened the sudden presentiment of a different life. It was not healed legs, cleansed skin, or restored sight that struck them. “The greatest miracle of all was that truly human gaze which revealed man to himself and was impossible to evade” (Fr. Giussani).

The Church celebrates Christmas so that we, too, can experience this embrace that takes hold of our humanity, mine and yours, in order to fulfill that expectation that vibrates in every beat of our restless hearts. Just as it did 2,000 years ago, the meaning of existence makes itself present today through a human reality that can be seen and touched, within time and space; it reaches us with an unmistakable accent of promise and hope to which we can attach ourselves, within the life of the Church.
This is the grace, the new beginning in the world, witnessed to us in the first place by Benedict XVI: “Rightly so, no one can have the truth. It is the truth that possesses us, it is a living thing! We do not possess it but are held by it. God came so close to us that He Himself became a man: this should disconcert and surprise us again and again!”
Merry Christmas to all.