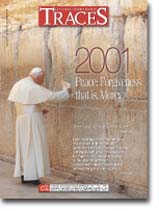 In this, the first issue of 2001, we offer a letter from Fr. Giussani to the editor of la Repubblica, which appeared in the December 24, 2000, issue of the daily newspaper

Dear Editor,
The bomb placed a few days ago on the roof of the Milan Cathedral makes one think that this is an attack on the place that is the wellspring of “peace and reconciliation for all,” as Cardinal Martini said in his comment on the event. Everyone appeals to peace, both believers and non-believers, on the left and on the right, but as this peace is acclaimed more and more loudly, the more violence appears to each side to be the only real prospect with a chance of working out a solution. Thus every man who is guided by a will for peace cannot avoid a feeling of diffidence that ruins every aspect of security. We are living in an era that seems to be described by the Bible verse, “When I speak of peace they are all for war!” (Psalm 120). But man’s awareness can open up to a chance for peace at least in one way, the clear and certain affirmation of a meaning for human life. This is the exhortative power of the word peace: it can give emphasis to the human feeling for all of life itself; whoever cries out this word feels that it is the ultimate reason for the determining factors of his social, family, and personal life. The meaning of the word peace always involves the feelings of life in their entirety; it involves them in accordance with a justice that is such in the face of destiny, whether written with a small or a capital D.
If there is a word that is apt for defining this pondus that adheres to the human feeling of peace, it is religiosity, religiosity as a dimension of life. This word pervades any formula one can come up with, implying an ultimate purpose for which a person accepts to exist and to act. What makes us feel the necessity to live relationships of any kind is the pre-sentiment of an ultimate positivity. The judgment that this presentiment–which as such is present in everyone more often than not–passes on everyday life can even be the fruit of that cynicism that is so plentiful in our society. Thus, locating divinity (or, in other terms, the supreme purpose of one’s actions) in political power can mislead the most committed, most thoughtful persons about the possibility of achieving what the ancients called the pax romana–a generic tolerance for everyone, as long as the last word was left to the political power, so that it was permissible to pay homage to any God as long as this did not detract from the divinity of the emperor–which in our day might be called pax americana or social peace.
I say this because it is harder to find a true use of the word peace in the great political and economic machinations than in the relationship between a man and woman within the family or in the tangle of tendencies that are seeking personal fulfillment or satisfaction, that is to say, in the heart of man. All this channels attention and devotion toward the Christian feast of Christmas. The only reason for this holy day lies in the fact that the mysterious destiny made itself known to mankind by identifying with a Man born of a virgin, because He was then destined to die in order to rise again, thus answering everyone’s expectations. Peace, then, can be felt and lived and thought only on two conditions: vocation, that is, dependence on an Other as the design of and judgment on one’s own life–as it emerged for the first time in the history of the Hebrew people–and education to the knowledge of good and evil.
For us, Christmas signals that Christ’s vocation, His life, was the proclaimed will to obey the great wellspring of Mystery, in an education lived as the inexhaustible passion for knowledge of good and evil, as it emerges in the history of His people. Therefore, peace depends on man’s admitting that it is impossible for him to become perfect by his own efforts, while he indomitably acknowledges his debt to Being. Christmas is all of this, an ever new challenge to all of mankind, as the lasting wellspring of the proposal which life is, whatever one’s condition. In the tenderness felt before the image of a newborn child, the infinite gap between man’s actions and his destiny is bridged, in the peace of forgiveness. Thus to the thinking person, Christmas can appear as neither frustrated sweetness nor despair. The Pope’s tireless humanity leads us to this ultimate synthesis, in which man’s dignity and wholeness are everything, that is to say, mercy.
Luigi Giussani