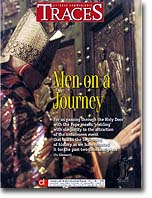 Forbes A.S.A.P. magazine has published a collector's issue on the theme of "convergence." The separation of faith and reason reduces faith to a mere idea among other ideas, permissible according to one overarching idea: the hegemony of dollar

Some of us attended the Christmas Eve ceremony in Saint Peter's in Rome during which John Paul II opened the Holy Door. Before the event itself, thousands of comments had already appeared in the media. Others were made afterwards, some of them useful, others less so.
To those of us who were there, three things remained clearly impressed on our minds.

First. There was a long moment of silence and suspension just before 11 o'clock, the time set for the ceremony to start. The great basilica, as crowded as the square outside, was mute, and evident on everyone's face was the tension of waiting and of profound curiosity.
And yet, we knew why we were there; the meaning and also, more or less, the form of what was about to take place were known. We had already seen the Pope on numerous other occasions, we knew what he represents. And we also had some idea of the faith and the Church. Many other aspects of Christian experience were known to us. But the expectation, the profound curiosity felt deep in the heart for what we were about to see overcame everything else.
There is something that the heart awaits and that no wisdom understands or exhausts; something that comes before everything we know.

Second. The presence of the Pope, his figure, was what everyone's eyes sought. What is so striking about that figure, which after twenty years of pontificate arouses wonder and admiration, as though before a presence that is completely human and yet charged with Mystery? The Mystery of the life of the Church is powerfully expressed through the person of John Paul II: the divine comes down to us and makes itself perceptible through the human. John Paul II himself spoke of this during his homily: "God became man, taking to himself our flesh…. He was born in time. God entered history…. The incomparable eternal 'today' of God has become present in everyday human life." The Pope who moved toward the altar of the Confessio was a man, clothed, even before his vestments, in the dress of his own normal humanity.
As the beautiful line from Carlo Betocchi's poem says, "What is needed is a man…."

Third. Saint Peter's Cathedral and the square were crowded with people of different races and cultures. The ceremony took notice of this fact. It was a people sui generis-as Paul VI said one day-united by the force of the announcement and the correspondence this finds in the heart of every person. The Christian announcement is simple, elementary. Its exceptional nature lies not in strangeness, but precisely in the fact that it is what everyone is waiting for. As Father Giussani wrote in the December 24th issue of The pilgrim's Journal: "For us passing through the Holy Door with the Pope means 'yielding' with simplicity to the attraction of the unforeseen event that marks the beginning of history as we have counted it for the past two thousand years."
We were just a speck in that people which came together there with the entire two millennia of its history. A tiny part, a little group of friends.