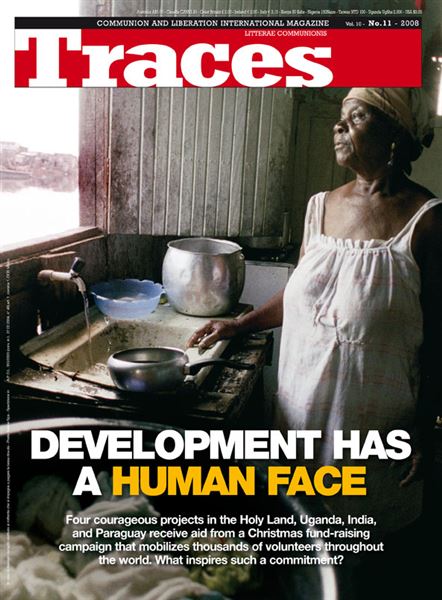 Eluana Englaro is a young woman in Northern Italy who, after a car accident on January 18, 1992, was left unconscious, and has remained so until today, cared for by nuns. Her father wishes to have her feeding tube removed and allow her to die, but up to now the courts had refused to grant him permission. On November 13, 2008, Italy’s highest court conceded Eluana’s father the right to have her disconnected from life support. As Traces goes to press, Eluana’s family has not yet found a hospital willing to excute the court’s decision

There is a thread linking the story of Eluano Englaro to the climate of unease in which we find ourselves, which has origins way before the so-called “crisis.” It is a slender thread, so slender that it’s hard to see, but it’s there all the same. If we had to give it a name, the most fitting one would probably be “loneliness,” the loneliness that many feel when life is so hard that it brings an emptiness greater than lack of money; and that makes the heart shudder when we think of how far the drama of Eluana has gone.

Let’s be honest, if we take life seriously and feel the true extent of the blow that comes to us from that hospital bed, it’s impossible not to feel a question arise, because we are before a mystery, but it doesn’t seem to work out; things are not going the way we would like. The suffering is too great, and the discrepancy between our measure and the abyss of suffering that we see, for us not to find ourselves faced with two alternatives: to embrace it or to run away; to obey or to refuse; to give credit to the friendship of Him who told us, “Even the hairs on your head are numbered,” or to follow the doubt that gnaws at us, leading us to a deep, radical loneliness.
In a meeting that addressed the core of the Englaro question, Julián Carrón expressed the problem in these terms: “The problem of evil is not just pain, but that it causes harm. And what is the greatest harm that pain causes? …The greatest harm is that which breaks connections, breaks relationships; and when the relationship we have with the Mystery is broken, …when something comes along that is beyond our measure, and we no longer understand anything, the evil, this evil that is beyond our measure, harms us. And what is the harm it does us? It detaches us from the Mystery, because it introduces a suspicion about Him. ‘Will He really love us? Will He be as good as I thought?’”
Many of us have this suspicion. Certainly, before the mystery of Eluana, the pain is sharper and more piercing, but it is the same unease we feel when, in the course of our lives, we find things harder to bear–when relationships suffer, when things are not going well at work, or we lose our jobs, and things don’t seem to be working out. “Will He love us?”

As we are facing this question, along comes Christmas. “A fact” and, then, “a phenomenon of new humanity.” It is a relationship, a companionship; in a word, the opposite of loneliness; a companionship that enters into history, into our history, not in order to sweep away the hardship once and for all, but to make us more and more sure of that relationship with the Mystery. It’s enough to be with Christ, to follow Him, and to imitate Him. It is enough to be sons, like Him; to learn from Him that relationship with the Father, here and now, is the foundation of life, amidst all the suffering, discovering that we could never, never ever, be alone, because we are loved here and now, like Him, and because He is here.